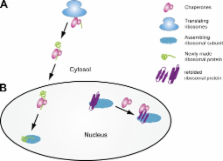 Converging concepts of protein folding in vitro and in vivo.

F. Ulrich Hartl,  Manajit Hayer-Hartl (2009)
Most proteins must fold into precise three-dimensional conformations to fulfill their biological functions. Here we review recent concepts emerging from studies of protein folding in vitro and in vivo, with a focus on how proteins navigate the complex folding energy landscape inside cells with the aid of molecular chaperones. Understanding these reactions is also of considerable medical relevance, as the aggregation of misfolding proteins that escape the cellular quality-control machinery underlies a range of debilitating diseases, including many age-onset neurodegenerative disorders.

An atlas of chaperone–protein interactions in Saccharomyces cerevisiae: implications to protein folding pathways in the cell

Yunchen Gong,  Yoshito Kakihara,  Nevan Krogan … (2009)
Molecular chaperones are known to be involved in many cellular functions, however, a detailed and comprehensive overview of the interactions between chaperones and their cofactors and substrates is still absent. Systematic analysis of physical TAP-tag based protein–protein interactions of all known 63 chaperones in Saccharomyces cerevisiae has been carried out. These chaperones include seven small heat-shock proteins, three members of the AAA+ family, eight members of the CCT/TRiC complex, six members of the prefoldin/GimC complex, 22 Hsp40s, 1 Hsp60, 14 Hsp70s, and 2 Hsp90s. Our analysis provides a clear distinction between chaperones that are functionally promiscuous and chaperones that are functionally specific. We found that a given protein can interact with up to 25 different chaperones during its lifetime in the cell. The number of interacting chaperones was found to increase with the average number of hydrophobic stretches of length between one and five in a given protein. Importantly, cellular hot spots of chaperone interactions are elucidated. Our data suggest the presence of endogenous multicomponent chaperone modules in the cell.