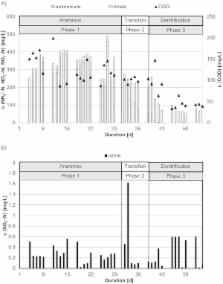 Due to its high global warming potential, nitrous oxide (N 2O) emissions from wastewater treatment processes have recently received a high degree of attention. Nevertheless, there is still a lack of information regarding the microbiological processes leading to N 2O production. In this study, two lab‐scale sequencing batch reactors were operated with deammonification biomass to investigate the role of denitrification and the influence of substrate availability regarding N 2O formation during the anoxic phase of deammonification. Three different operational phases were established: within the first phase conversion by anammox was favoured and after a transition phase, denitrification activity was promoted. Low nitrous oxide production was observed during stable operation aiming for anammox conversion. Pulsed inflow of the wastewater containing ammonium (NH 4 +) and nitrite (NO 2 ‐) led to increased N 2O production rates. Within the period of denitrification as dominating nitrogen conversion process, the nitrous oxide concentration level was higher during continuous inflow conditions, but the reaction to pulsed inflow was less pronounced. The results indicated that denitrification was responsible for N 2O formation from the deammonification biomass. Operational settings to achieve suppression of denitrification processes to a large extend were deducted from the results of the experiments.

Marlies J. Kampschreur,  Hardy Temmink,  Robbert Kleerebezem … (2009)
Nitrous oxide (N(2)O), a potent greenhouse gas, can be emitted during wastewater treatment, significantly contributing to the greenhouse gas footprint. Measurements at lab-scale and full-scale wastewater treatment plants (WWTPs) have demonstrated that N(2)O can be emitted in substantial amounts during nitrogen removal in WWTPs, however, a large variation in reported emission values exists. Analysis of literature data enabled the identification of the most important operational parameters leading to N(2)O emission in WWTPs: (i) low dissolved oxygen concentration in the nitrification and denitrification stages, (ii) increased nitrite concentrations in both nitrification and denitrification stages, and (iii) low COD/N ratio in the denitrification stage. From the literature it remains unclear whether nitrifying or denitrifying microorganisms are the main source of N(2)O emissions. Operational strategies to prevent N(2)O emission from WWTPs are discussed and areas in which further research is urgently required are identified.

Anton Jetten,  Hester M. den Ruijter,  Laura van Niftrik … (2009)
Anaerobic ammonium-oxidizing (anammox) bacteria are one of the latest additions to the biogeochemical nitrogen cycle. These bacteria derive their energy for growth from the conversion of ammonium and nitrite into dinitrogen gas in the complete absence of oxygen. These slowly growing microorganisms belong to the order Brocadiales and are affiliated to the Planctomycetes. Anammox bacteria are characterized by a compartmentalized cell architecture featuring a central cell compartment, the "anammoxosome". Thus far unique "ladderane" lipid molecules have been identified as part of their membrane systems surrounding the different cellular compartments. Nitrogen formation seems to involve the intermediary formation of hydrazine, a very reactive and toxic compound. The genome of the anammox bacterium Kuenenia stuttgartiensis was assembled from a complex microbial community grown in a sequencing batch reactor (74% enriched in this bacterium) using a metagenomics approach. The assembled genome allowed the in silico reconstruction of the anammox metabolism and identification of genes most likely involved in the process. The present anammox pathway is the only one consistent with the available experimental data, thermodynamically and biochemically feasible, and consistent with Ockham's razor: it invokes minimum biochemical novelty and requires the fewest number of biochemical reactions. The worldwide presence of anammox bacteria has now been established in many oxygen-limited marine and freshwater systems, including oceans, seas, estuaries, marshes, rivers and large lakes. In the marine environment over 50% of the N(2) gas released may be produced by anammox bacteria. Application of the anammox process offers an attractive alternative to current wastewater treatment systems for the removal of ammonia-nitrogen. Currently, at least five full scale reactor systems are operational.