Evidence that a tax on sugar sweetened beverages reduces the obesity rate: a meta-analysis 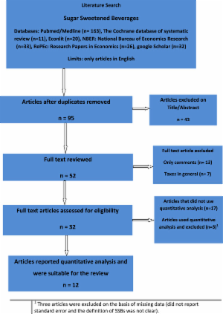 Excess intake of sugar sweetened beverages (SSBs) has been shown to result in weight gain. To address the growing epidemic of obesity, one option is to combine programmes that target individual behaviour change with a fiscal policy such as excise tax on SSBs. This study evaluates the literature on SSB taxes or price increases, and their potential impact on consumption levels, obesity, overweight and body mass index (BMI). The possibility of switching to alternative drinks is also considered.

The following databases were used: Pubmed/Medline, The Cochrane Database of Systematic Reviews, Google Scholar, Econlit, National Bureau of Economics Research (NBER), Research Papers in Economics (RePEc). Articles published between January 2000 and January 2013, which reported changes in diet or BMI, overweight and/or obesity due to a tax on, or price change of, SSBs were included.

A comparative risk assessment of burden of disease and injury attributable to 67 risk factors and risk factor clusters in 21 regions, 1990-2010: a systematic analysis for the Global Burden of Disease Study 2010.

Benjamin Cowie,  Catherine Michaud,  John R. Balmes … (2013)
Quantification of the disease burden caused by different risks informs prevention by providing an account of health loss different to that provided by a disease-by-disease analysis. No complete revision of global disease burden caused by risk factors has been done since a comparative risk assessment in 2000, and no previous analysis has assessed changes in burden attributable to risk factors over time. We estimated deaths and disability-adjusted life years (DALYs; sum of years lived with disability [YLD] and years of life lost [YLL]) attributable to the independent effects of 67 risk factors and clusters of risk factors for 21 regions in 1990 and 2010. We estimated exposure distributions for each year, region, sex, and age group, and relative risks per unit of exposure by systematically reviewing and synthesising published and unpublished data. We used these estimates, together with estimates of cause-specific deaths and DALYs from the Global Burden of Disease Study 2010, to calculate the burden attributable to each risk factor exposure compared with the theoretical-minimum-risk exposure. We incorporated uncertainty in disease burden, relative risks, and exposures into our estimates of attributable burden. In 2010, the three leading risk factors for global disease burden were high blood pressure (7·0% [95% uncertainty interval 6·2-7·7] of global DALYs), tobacco smoking including second-hand smoke (6·3% [5·5-7·0]), and alcohol use (5·5% [5·0-5·9]). In 1990, the leading risks were childhood underweight (7·9% [6·8-9·4]), household air pollution from solid fuels (HAP; 7·0% [5·6-8·3]), and tobacco smoking including second-hand smoke (6·1% [5·4-6·8]). Dietary risk factors and physical inactivity collectively accounted for 10·0% (95% UI 9·2-10·8) of global DALYs in 2010, with the most prominent dietary risks being diets low in fruits and those high in sodium. Several risks that primarily affect childhood communicable diseases, including unimproved water and sanitation and childhood micronutrient deficiencies, fell in rank between 1990 and 2010, with unimproved water and sanitation accounting for 0·9% (0·4-1·6) of global DALYs in 2010. However, in most of sub-Saharan Africa childhood underweight, HAP, and non-exclusive and discontinued breastfeeding were the leading risks in 2010, while HAP was the leading risk in south Asia. The leading risk factor in Eastern Europe, most of Latin America, and southern sub-Saharan Africa in 2010 was alcohol use; in most of Asia, North Africa and Middle East, and central Europe it was high blood pressure. Despite declines, tobacco smoking including second-hand smoke remained the leading risk in high-income north America and western Europe. High body-mass index has increased globally and it is the leading risk in Australasia and southern Latin America, and also ranks high in other high-income regions, North Africa and Middle East, and Oceania. Worldwide, the contribution of different risk factors to disease burden has changed substantially, with a shift away from risks for communicable diseases in children towards those for non-communicable diseases in adults. These changes are related to the ageing population, decreased mortality among children younger than 5 years, changes in cause-of-death composition, and changes in risk factor exposures. New evidence has led to changes in the magnitude of key risks including unimproved water and sanitation, vitamin A and zinc deficiencies, and ambient particulate matter pollution. The extent to which the epidemiological shift has occurred and what the leading risks currently are varies greatly across regions. In much of sub-Saharan Africa, the leading risks are still those associated with poverty and those that affect children. Bill & Melinda Gates Foundation. Copyright © 2012 Elsevier Ltd. All rights reserved.

Body-mass index and incidence of cancer: a systematic review and meta-analysis of prospective observational studies.

Andrew G. Renehan,  Margaret Tyson,  Matthias Egger … (2008)
Excess bodyweight, expressed as increased body-mass index (BMI), is associated with the risk of some common adult cancers. We did a systematic review and meta-analysis to assess the strength of associations between BMI and different sites of cancer and to investigate differences in these associations between sex and ethnic groups. We did electronic searches on Medline and Embase (1966 to November 2007), and searched reports to identify prospective studies of incident cases of 20 cancer types. We did random-effects meta-analyses and meta-regressions of study-specific incremental estimates to determine the risk of cancer associated with a 5 kg/m2 increase in BMI. We analysed 221 datasets (141 articles), including 282,137 incident cases. In men, a 5 kg/m2 increase in BMI was strongly associated with oesophageal adenocarcinoma (RR 1.52, p<0.0001) and with thyroid (1.33, p=0.02), colon (1.24, p<0.0001), and renal (1.24, p <0.0001) cancers. In women, we recorded strong associations between a 5 kg/m2 increase in BMI and endometrial (1.59, p<0.0001), gallbladder (1.59, p=0.04), oesophageal adenocarcinoma (1.51, p<0.0001), and renal (1.34, p<0.0001) cancers. We noted weaker positive associations (RR <1.20) between increased BMI and rectal cancer and malignant melanoma in men; postmenopausal breast, pancreatic, thyroid, and colon cancers in women; and leukaemia, multiple myeloma, and non-Hodgkin lymphoma in both sexes. Associations were stronger in men than in women for colon (p<0.0001) cancer. Associations were generally similar in studies from North America, Europe and Australia, and the Asia-Pacific region, but we recorded stronger associations in Asia-Pacific populations between increased BMI and premenopausal (p=0.009) and postmenopausal (p=0.06) breast cancers. Increased BMI is associated with increased risk of common and less common malignancies. For some cancer types, associations differ between sexes and populations of different ethnic origins. These epidemiological observations should inform the exploration of biological mechanisms that link obesity with cancer.

Boyd Swinburn,  Gary Sacks,  Kevin D. Hall … (2011)
The simultaneous increases in obesity in almost all countries seem to be driven mainly by changes in the global food system, which is producing more processed, affordable, and effectively marketed food than ever before. This passive overconsumption of energy leading to obesity is a predictable outcome of market economies predicated on consumption-based growth. The global food system drivers interact with local environmental factors to create a wide variation in obesity prevalence between populations. Within populations, the interactions between environmental and individual factors, including genetic makeup, explain variability in body size between individuals. However, even with this individual variation, the epidemic has predictable patterns in subpopulations. In low-income countries, obesity mostly affects middle-aged adults (especially women) from wealthy, urban environments; whereas in high-income countries it affects both sexes and all ages, but is disproportionately greater in disadvantaged groups. Unlike other major causes of preventable death and disability, such as tobacco use, injuries, and infectious diseases, there are no exemplar populations in which the obesity epidemic has been reversed by public health measures. This absence increases the urgency for evidence-creating policy action, with a priority on reduction of the supply-side drivers. Copyright © 2011 Elsevier Ltd. All rights reserved.