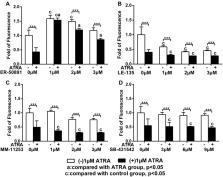 Hypervitaminosis A, alcoholism or medical treatment for acute promyelocytic leukaemia may cause unphysiologically high accumulation of all-trans retinoic acid (ATRA), which could inhibit osteoblastogenesis, thereby triggering osteoporosis. We have shown that bone morphogenetic protein-2 (BMP-2) can only partially antagonize the inhibitive effects of ATRA. In this study, we hypothesized that antagonists of retinoic acid receptors (RARs) could further antagonize the inhibitive effect of ATRA and rescue BMP2-induced osteoblastogenesis.

We first screened the dose-dependent effects of the specific antagonists of RAR α, β and γ and transforming growth factor-beta receptor (ER-50891, LE-135, MM11253, and SB-43142, respectively) on ATRA-induced inhibition of the total cell metabolic activity and proliferation of preosteoblasts. We selected ER-50891 and tested its effects on osteoblastogenesis with the presence or absence of 1 μM ATRA and/or 200 ng/mL BMP-2. We measured the following parameters: Alkaline phosphatase activity (ALP), osteocalcin (OCN) expression and extracellular matrix mineralization as well as the level of phosphorylated Smad1/5.

ER-50891 but not LE-135, MM11253, or SB-431542 significantly antagonized the inhibition of ATRA and enhanced the total cell metabolic activity and proliferation of preosteoblasts. Dose-dependent assays show ER-50891 could also rescue ATRA inhibited OCN expression and mineralization with or without the induction of BMP. ER-50891 also suppressed the ALP activity that was synergistically enhanced by BMP and ATRA. Neither ATRA, nor ER-50891 or their combination significantly affected the level of BMP-induced phosphorylated Smad1/5.

P Bessa,  Jesús M Casal,  R L Reis (2015)
Bone morphogenetic proteins (BMPs) are cytokines with a strong effect on bone and cartilage growth and with important roles during embryonic patterning and early skeletal formation. BMPs have promising potential for clinical bone and cartilage repair, working as powerful bone-inducing components in diverse tissue-engineering products. Synthetic polymers, natural origin polymers, inorganic materials and composites may be used as carriers for the delivery of BMPs. Carriers range from nanoparticles to complex three-dimensional (3D) scaffolds, membranes for tissue-guided regeneration, biomimetic surfaces and smart thermosensitive hydrogels. Current clinical uses include spinal fusion, healing of long bone defects and craniofacial and periodontal applications, amongst others. BMP-2 and BMP-7 have recently received approval by the US Food and Drug Administration (FDA) for specific clinical cases, delivered in absorbable collagen sponges. Considering the expanding number of publications in the field of BMPs, there are prospects of a brilliant future in the field of regenerative medicine of bone and cartilage with the use of BMPs.

Joseph Napoli (2011)
All-trans-retinoic acid (atRA) provides essential support to diverse biological systems and physiological processes. Epithelial differentiation and its relationship to cancer, and embryogenesis have typified intense areas of interest into atRA function. Recently, however, interest in atRA action in the nervous system, the immune system, energy balance and obesity has increased considerably, especially concerning postnatal function. atRA action depends on atRA biosynthesis: defects in retinoid-dependent processes increasingly relate to defects in atRA biogenesis. Considerable evidence indicates that physiological atRA biosynthesis occurs via a regulated process, consisting of a complex interaction of retinoid binding-proteins and retinoid recognizing enzymes. An accrual of biochemical, physiological and genetic data have identified specific functional outcomes for the retinol dehydrogenases, RDH1, RDH10, and DHRS9, as physiological catalysts of the first step in atRA biosynthesis, and for the retinal dehydrogenases RALDH1, RALDH2, and RALDH3, as catalysts of the second and irreversible step. Each of these enzymes associates with explicit biological processes mediated by atRA. Redundancy occurs, but seems limited. Cumulative data support a model of interactions among these enzymes with retinoid binding-proteins, with feedback regulation and/or control by atRA via modulating gene expression of multiple participants. The ratio apo-CRBP1/holo-CRBP1 participates by influencing retinol flux into and out of storage as retinyl esters, thereby modulating substrate to support atRA biosynthesis. atRA biosynthesis requires the presence of both an RDH and an RALDH: conversely, absence of one isozyme of either step does not indicate lack of atRA biosynthesis at the site. This article is part of a Special Issue entitled: Retinoid and Lipid Metabolism. © 2011 Elsevier B.V. All rights reserved.