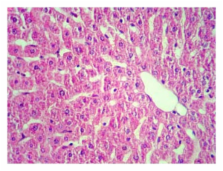 Although diabetic hepatopathy is potentially less common, it may be appropriate for addition to the list of target organ conditions related to diabetes. This study was designed to evaluate the hepatoprotective properties of green tea extract (GTE) in STZ-induced diabetes in rats. Wistar rats were made diabetic through single injection of STZ (75 mg/kg i.p.). The rats were randomly divided into four groups of 10 animals each: Group 1, healthy control; Group 2, nondiabetics treated with GTE administered orally (1.5%, w/v); Group 3, diabetics; Group 4, diabetics treated with GTE (1.5%, w/v) for 8 weeks. Serum biomarkers were assessed to determine hepatic injury. Malondialdehyde (MDA) and reduced glutathione (GSH) contents were measured to assess free radical activity in the liver tissue. Hepatic antioxidant activities of glutathione peroxidase (GSH-Px), superoxide dismutase (SOD), and catalase (CAT) were also determined. The biochemical findings were matched with histopathological verifications. Liver MDA content and serum levels of ALT, AST, ALP, and bilirubin in Group 3 significantly increased compared to Group 1 ( P < 0.05) and significantly decreased in Group 4 compared to Group 3 ( P < 0.05). Serum albumin level and GSH, SOD, CAT, and GSH-Px contents of the liver in Group 3 were significantly decreased compared to Group 1 ( P < 0.05) and were significantly increased in Group 4 compared to Group 3 ( P < 0.05). Histopathologically, the changes were in the same direction with biochemical findings. This study proved the hepatoprotective activity of GTE in experimentally induced diabetic rats.

Selenium: biochemical role as a component of glutathione peroxidase.

Polyphenolic flavanols as scavengers of aqueous phase radicals and as chain-breaking antioxidants.

G Paganga,  N Salah,  G. Bolwell … (1995)
The purpose of this investigation was to establish the relative antioxidant activities in vitro of the flavanolic polyphenols, the catechins, and catechin-gallate esters. The relative antioxidant potentials were measured against radicals generated in the aqueous phase and against propagating lipid peroxyl radicals. The results show that in the aqueous phase their order of effectiveness as radical scavengers is epicatechin gallate (ECG) > epigallocatechin gallate (EGCG) > epigallocatechin (EGC) > gallic acid (GA) > epicatechin congruent to catechin; against propagating lipid peroxyl radical species, epicatechin and catechin are as effective as ECG and EGCG, the least efficacious being EGC and GA. This is consistent with their relative abilities to protect against consumption of LDL alpha-tocopherol. The results are discussed in the context of the most relevant antioxidant constituents of green tea extracts.