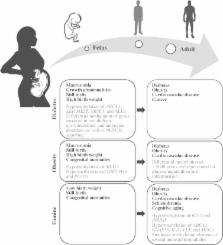 The phenomenon that adverse environmental exposures in early life are associated with increased susceptibilities for many adult, particularly metabolic diseases, is now referred to as ‘developmental origins of health and disease (DOHAD)’ or ‘Barker’ hypothesis. Fetal overnutrition and undernutrition have similar long-lasting effects on the setting of the neuroendocrine control systems, energy homeostasis, and metabolism, leading to life-long increased morbidity. There are sensitive time windows during early development, where environmental cues can program persistent epigenetic modifications which are generally assumed to mediate these gene–environment interactions. Most of our current knowledge on fetal programing comes from animal models and epidemiological studies in humans, in particular the Dutch famine birth cohort. In industrialized countries, there is more concern about adverse long-term consequences of fetal overnutrition, i.e. by exposure to gestational diabetes mellitus and/or maternal obesity which affect 10–20% of pregnancies. Epigenetic changes due to maternal diabetes/obesity may predispose the offspring to develop metabolic disease later in life and, thus, transmit the adverse environmental exposure to the next generation. This vicious cycle could contribute significantly to the worldwide metabolic disease epidemics. In this review article, we focus on the epigenetics of an adverse intrauterine environment, in particular gestational diabetes, and its implications for the prevention of complex disease.

D Barker,  C N Hales,  C H D Fall … (1993)
Two follow-up studies were carried out to determine whether lower birthweight is related to the occurrence of syndrome X-Type 2 (non-insulin-dependent) diabetes mellitus, hypertension and hyperlipidaemia. The first study included 407 men born in Hertfordshire, England between 1920 and 1930 whose weights at birth and at 1 year of age had been recorded by health visitors. The second study included 266 men and women born in Preston, UK, between 1935 and 1943 whose size at birth had been measured in detail. The prevalence of syndrome X fell progressively in both men and women, from those who had the lowest to those who had the highest birthweights. Of 64-year-old men whose birthweights were 2.95 kg (6.5 pounds) or less, 22% had syndrome X. Their risk of developing syndrome X was more than 10 times greater than that of men whose birthweights were more than 4.31 kg (9.5 pounds). The association between syndrome X and low birthweight was independent of duration of gestation and of possible confounding variables including cigarette smoking, alcohol consumption and social class currently or at birth. In addition to low birthweight, subjects with syndrome X had small head circumference and low ponderal index at birth, and low weight and below-average dental eruption at 1 year of age. It is concluded that Type 2 diabetes and hypertension have a common origin in sub-optimal development in utero, and that syndrome X should perhaps be re-named "the small-baby syndrome".

Epigenetic inheritance at the agouti locus in the mouse.

Larry D. Martin,  Wayne Sutherland,  E Whitelaw … (1999)
Epigenetic modifications have effects on phenotype, but they are generally considered to be cleared on passage through the germ line in mammals, so that only genetic traits are inherited. Here we describe the inheritance of an epigenetic modification at the agouti locus in mice. In viable yellow ( A(vy)/a) mice, transcription originating in an intra-cisternal A particle (IAP) retrotransposon inserted upstream of the agouti gene (A) causes ectopic expression of agouti protein, resulting in yellow fur, obesity, diabetes and increased susceptibility to tumours. The pleiotropic effects of ectopic agouti expression are presumably due to effects of the paracrine signal on other tissues. Avy mice display variable expressivity because they are epigenetic mosaics for activity of the retrotransposon: isogenic Avy mice have coats that vary in a continuous spectrum from full yellow, through variegated yellow/agouti, to full agouti (pseudoagouti). The distribution of phenotypes among offspring is related to the phenotype of the dam; when an A(vy) dam has the agouti phenotype, her offspring are more likely to be agouti. We demonstrate here that this maternal epigenetic effect is not the result of a maternally contributed environment. Rather, our data show that it results from incomplete erasure of an epigenetic modification when a silenced Avy allele is passed through the female germ line, with consequent inheritance of the epigenetic modification. Because retrotransposons are abundant in mammalian genomes, this type of inheritance may be common.

Cytosine methylation and the ecology of intragenomic parasites.

James Walsh,  Timothy Bestor,  T Bestor … (1997)
Most of the 5-methylcytosine in mammalian DNA resides in transposons, which are specialized intragenomic parasites that represent at least 35% of the genome. Transposon promoters are inactive when methylated and, over time, C-->T transition mutations at methylated sites destroy many transposons. Apart from that subset of genes subject to X inactivation and genomic imprinting, no cellular gene in a non-expressing tissue has been proven to be methylated in a pattern that prevents transcription. It has become increasingly difficult to hold that reversible promoter methylation is commonly involved in developmental gene control; instead, suppression of parasitic sequence elements appears to be the primary function of cytosine methylation, with crucial secondary roles in allele-specific gene expression as seen in X inactivation and genomic imprinting.

Correspondence should be addressed to T Haaf; Email: thomas.haaf@ 123456uni-wuerzburg.de