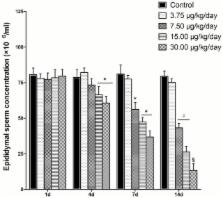 Microcystins LR (MC-LR) are hepatotoxic cyanotoxins that have been shown to induce reproductive toxicity, and Hypothalamic–Pituitary–Gonadal Axis (HPG) is responsible for the control of reproductive functions. However, few studies have been performed to evaluate the effects of MC-LR on HPG axis. This study aimed to investigate the MC-LR-induced toxicity in the reproductive system of mouse and focus on the HPG axis.

Adult male C57BL/6 mice were exposed to various concentrations of MC-LR (0, 3.75, 7.50, 15.00 and 30.00 µg/kg body weight per day) for 1 to 14 days, and it was found that exposure to different concentrations of MC-LR significantly disturbed sperm production in the mice testes in a dose- and time-dependent manner. To elucidate the associated possible mechanisms, the serum levels of testosterone, follicle-stimulating hormone (FSH) and luteinizing hormone (LH) were assessed. Meanwhile, PCR assays were employed to detect alterations in a series of genes involved in HPG axis, such as FSH, LH, gonadotropin-releasing hormone (GnRH) and their complement receptors. Furthermore, the effect of MC-LR on the viability and testosterone production of Leydig cells were tested in vitro. Results: MC-LR significantly impaired the spermatogenesis of mice possibly through the direct or indirect inhibition of GnRH synthesis at the hypothalamic level, which resulted in reduction of serum levels of LH that lead to suppression of testosterone production in the testis of mice.

MC-LR may be a GnRH toxin that would disrupt the reproductive system of mice.

Cyanobacterial microcystin-LR is a potent and specific inhibitor of protein phosphatases 1 and 2A from both mammals and higher plants.

Carol MacKintosh,  Kenneth A. Beattie,  Susanne Klumpp … (1990)
The cyclic heptapeptide, microcystin-LR, inhibits protein phosphatases 1 (PP1) and 2A (PP2A) with Ki values below 0.1 nM. Protein phosphatase 2B is inhibited 1000-fold less potently, while six other phosphatases and eight protein kinases tested are unaffected. These results are strikingly similar to those obtained with the tumour promoter okadaic acid. We establish that okadaic acid prevents the binding of microcystin-LR to PP2A, and that protein inhibitors 1 and 2 prevent the binding of microcystin-LR to PP1. We discuss the possibility that inhibition of PP1 and PP2A accounts for the extreme toxicity of microcystin-LR, and indicate its potential value in the detection and analysis of protein kinases and phosphatases.

The central role of Sertoli cells in spermatogenesis.

S Pflugmacher,  Roger C. Wiegand (2005)
Cyanobacteria are one of the most diverse groups of gram-negative photosynthetic prokaryotes. Many of them are able to produce a wide range of toxic secondary metabolites. These cyanobacterial toxins can be classified in five different groups: hepatotoxins, neurotoxins, cytotoxins, dermatotoxins, and irritant toxins (lipopolysaccharides). Cyanobacterial blooms are hazardous due to this production of secondary metabolites and endotoxins, which could be toxic to animals and plants. Many of the freshwater cyanobacterial blooms include species of the toxigenic genera Microcystis, Anabaena, or Plankthotrix. These compounds differ in mechanisms of uptake, affected organs, and molecular mode of action. In this review, the main focus is the aquatic environment and the effects of these toxins to the organisms living there. Some basic toxic mechanisms will be discussed in comparison to the mammalian system.

This project was funded by the National Natural Science Foundation of China under the grant 81200587. The funders had no role in study design, data collection and analysis, decision to publish, or preparation of the manuscript.