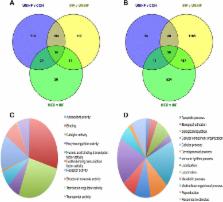 The immune response to infection in endometrium was mainly adaptive in nature, with the most upregulated genes functioning in either humoral or cell-mediated immunity. In contrast, the expression profile of infected fetal thymus revealed a predominantly innate immune response to infection, featuring the upregulation of genes regulated by type I interferon and pro-inflammatory cytokines. Fetal infection was associated with an increase in viral load coupled with a reduction in T cell signaling in the endometrium that could be due to PRRSV-controlled apoptosis of uninfected bystander cells. There was also evidence for a reduction in TWIST1 activity, a transcription factor involved in placental implantation and maturation, which could facilitate virus transmission or fetal pathology through dysregulation of placental function. Finally, results suggested that events within the fetus could also drive fetal pathology. Thymus samples of meconium-stained fetuses exhibited an increase in the expression of pro-inflammatory cytokine and granulocyte genes previously implicated in swine infectious disease pathology.

This study identified major differences in the response to PRRSV infection in the uterine endometrium and fetus at the gene expression level, and provides insight into the molecular basis of virus transmission and disease progression.

Cole Trapnell,  Lior Pachter,  Steven Salzberg (2010)
Motivation: A new protocol for sequencing the messenger RNA in a cell, known as RNA-Seq, generates millions of short sequence fragments in a single run. These fragments, or ‘reads’, can be used to measure levels of gene expression and to identify novel splice variants of genes. However, current software for aligning RNA-Seq data to a genome relies on known splice junctions and cannot identify novel ones. TopHat is an efficient read-mapping algorithm designed to align reads from an RNA-Seq experiment to a reference genome without relying on known splice sites. Results: We mapped the RNA-Seq reads from a recent mammalian RNA-Seq experiment and recovered more than 72% of the splice junctions reported by the annotation-based software from that study, along with nearly 20 000 previously unreported junctions. The TopHat pipeline is much faster than previous systems, mapping nearly 2.2 million reads per CPU hour, which is sufficient to process an entire RNA-Seq experiment in less than a day on a standard desktop computer. We describe several challenges unique to ab initio splice site discovery from RNA-Seq reads that will require further algorithm development. Availability: TopHat is free, open-source software available from http://tophat.cbcb.umd.edu Contact: cole@cs.umd.edu Supplementary information: Supplementary data are available at Bioinformatics online.