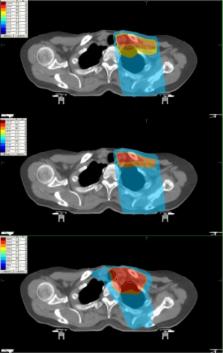 Irradiation of the supraclavicular fossa is commonly used as part of adjuvant breast radiotherapy. Intensity-modulated radiotherapy (IMRT) may be used to target this region accurately, and there are subgroups of patients that may benefit more from IMRT than others. We identify the benefit of IMRT over fixed-depth dose prescription to the supraclavicular fossa in patients of different builds in a clinical setting.

Fifteen patients who received radiotherapy to the left breast and supraclavicular fossa were selected. Computed tomographic planning was used to generate plans for supraclavicular fossa coverage. Dose prescription to 1.5 cm and 3.0 cm depths was compared with IMRT plans. Coverage of the planning target volume and dose to the organs at risk were compared and correlated with patient body mass index (BMI) and computed tomography measurements.

Ulf Johansson,  Torgny Svensson,  J Denekamp (2000)
To evaluate the incidence and prevalence of various signs of late morbidity, their time of appearance and pattern of progression during an observation period up to 34 years in breast cancer patients treated with postoperative radiation therapy after radical mastectomy. A group of 71 breast cancer patients received in 1963-1965 aggressive postoperative telecobalt therapy to the parasternal, axillary, and supraclavicular lymph node regions after total mastectomy and axillary clearance. None of the patients received chemotherapy either prior to, or after the irradiation as part of their primary treatment. The prescribed dose to the three lymph node regions was 44 Gy in 11 fractions. Only two of the three fields were treated per day. This total dose was given in 16-17 fractions over 3-4 weeks. Because of the overlap of the supraclavicular and axillary fields, the dose received by the brachial plexus was not the dose that was prescribed. A retrospective dose calculation showed that the total dose to the brachial plexus was 57 Gy, delivered as a complex combination of 1.8 Gy, 3.4 Gy, and 5.2 Gy fractions. This cohort of patients has now been followed to 34 years and the late side effects of the treatment evaluated and scored. This series is unique in the literature. There is no comparable report of a detailed long-term follow-up in a homogeneously treated group of patients with such a high survival, especially among the younger women, where it is almost 50% at 30 years. This is the reason that they were able to develop some of the very slowly evolving injuries. There was progression of many of the late effects in the period between 5 and 34 years. The more serious morbidities have increased progressively over the whole 34-year follow-up period. Ninety-two percent of the long-term survivors have paralysis of their arm. Other neurological findings included unilateral vocal cord paralysis among 5% of the patients, who developed the disease after a median time of 19 years. All of them were left-sided, indicating a mediastinal involvement of the recurrent nerve. Local recurrence or the appearance of a new primary tumor infiltrating or causing pressure on the recurrent nerve were vigorously investigated and excluded as possible causes of these symptoms. The greatest risk for all cancer patients is the inadequate treatment of their disease, because this is inevitably lethal. The aggressiveness of the therapy and the acceptable risk of complications must therefore be balanced against the risk of recurrence. The neuropathy seems to be closely linked to the development of fibrosis around the nerve trunks. The use of large daily fractions, combined with hot spots from overlapping fields contributed to the severity of the complications.

Potential role of intensity-modulated photons and protons in the treatment of the breast and regional nodes.

Raymond Miralbell,  Damien Weber,  Michael Lomax … (2003)
To investigate, using comparative treatment planning, the potential improvements that could result through the use of intensity-modulated photons (intensity-modulated radiation therapy [IMRT]) and protons for the locoregional treatment of complex-target breast cancer. Using CT data from a breast cancer patient, treatment plans were computed using "standard" photon/electron, IMRT, and forward-planned proton techniques. A dose of 50 Gy was prescribed to the target volume consisting of the involved breast, internal mammary, supraclavicular, and axillary nodes. The standard plan was designed using 6-MV X-ray beams to the breast, axillary, and supraclavicular areas and a mixture of 6-MV X-rays and 12-MeV electrons for the internal mammary nodes. Two IMRT (IMX1 and IMX2) plans were calculated for nine evenly spaced beams using dose-volume constraints to the organs at risk. For plan IMX1, precedence was given to optimizing the reduction in lung and heart dose while preserving target dose homogeneity. For plan IMX2, an increased precedence was given to the lungs, heart, and contralateral breast to further reduce doses to these organs and to study the effect on target coverage. The proton plan consisted of two oblique, energy-modulated fields. Target dose homogeneity and the doses to neighboring organs were both considered when comparing the different plans. For the standard plan, dose-volume histograms (DVHs) of the target volumes showed severe dose heterogeneity, whereas target coverage for the IMRT and proton plans was comparable. Lung DVHs for the standard and IMRT plans were also comparable, while the proton plan showed the best sparing over all dose levels. Mean doses to the ipsilateral lung for the three plans were found to be 17 Gy, 15 Gy, and 13 Gy for the standard, IMRT, and proton plans, respectively. For the heart, the IMRT plan delivered the highest mean dose (16 Gy), reflecting the extra dose delivered through this organ to spare the lungs. This was reduced somewhat by the standard plan (15 Gy), with the best sparing being provided by the proton plan (6 Gy). When the IMRT plan was reoptimized with an increased precedence to the normal tissues, the mean doses to all neighboring organs at risk could be reduced, but only at the cost of substantial target dose heterogeneity. In comparison with the standard plan, IMRT photons have the potential to greatly improve the target dose homogeneity with only a small increase in the doses delivered to the neighboring critical structures. However, when attempting to further reduce doses to the critical structures, substantial loss of target dose homogeneity was found. In conclusion, only the two-field, energy-modulated proton plan had the potential to preserve target dose homogeneity while simultaneously minimizing the dose delivered to both lungs, heart, and the contralateral breast.