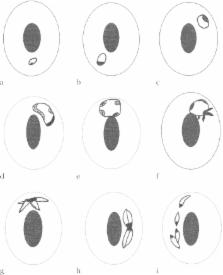 A new species of haematozoa, Babesia ugwidiensis sp. nov. from a cormorant is described. This is the first species of piroplasm to be recorded from the Phalacrocoracidae and the relationship of this parasite to other Babesia spp. from marine hosts is discussed.

Y Frenot,  E. de Oliveira,  M Gauthier-Clerc … (2001)
A survey of the temporal pattern of population structure and feeding activity of the seabird tick Ixodes uriae was conducted for the first time in two host species colonies: King penguin (Aptenodytes patagonicus halli) and Macaroni penguin (Eudyptes chrysolophus chrysolophus). The life cycle of the tick was investigated over 3 years in a King penguin colony and 2 years in a Macaroni penguin colony at Possession Island (Crozet Archipelago). There was a marked seasonal feeding activity pattern of ticks in both host species, connected with the presence of birds during the breeding season. Although the King penguin colonies were occupied throughout the year by birds, the favourable period for engorgement was limited to 3.5-4.5 months, and almost all the ticks overwintered in the unengorged state. Consequently, I. uriae probably completed its life cycle over 3 years in King penguin colonies. In contrast, this life cycle could be shortened to 2 years in Macaroni penguin colonies, as a result of a different timetable of the presence of birds for breeding and moulting. The relationships between such plasticity and the host behaviour and subantarctic climatic conditions are discussed.

Michael Yabsley,  David M Garner,  Shanon Zabolotzky … (2009)
A novel Babesia species is described from blood collected from 3 common murres (also known as common guillemots) (Uria aalge) from California. This is the first report of a Babesia species from the Alcidae and the second from the Charadriiformes. Babesia uriae n. sp. is morphologically similar to several other avian Babesia species but can be differentiated from Babesia bennetti, the only other species from a host in the Charadriiformes, by size of round and amoeboid forms. Phylogenetic analysis of near-full length 18S rRNA, ITS-1, 5.8S rRNA, and ITS-2 sequences indicated that the Babesia sp. from the common murre is closely related to Babesia poelea, a parasite of brown boobies (Sula leucogaster).

Michael Yabsley,  Thierry M Work,  Robert Rameyer (2006)
The phylogenetic relationship of avian Babesia with other piroplasms remains unclear, mainly because of a lack of objective criteria such as molecular phylogenetics. In this study, our objective was to sequence the entire 18S, ITS-1, 5.8S, and ITS-2 regions of the rRNA gene and partial beta-tubulin gene of B. poelea, first described from brown boobies (Sula leucogaster) from the central Pacific, and compare them to those of other piroplasms. Phylogenetic analyses of the entire 18S rRNA gene sequence revealed that B. poelea belonged to the clade of piroplasms previously detected in humans, domestic dogs, and wild ungulates in the western United States. The entire ITS-1, 5.8S, ITS-2, and partial beta-tubulin gene sequence shared conserved regions with previously described Babesia and Theileria species. The intron of the beta-tubulin gene was 45 bp. This is the first molecular characterization of an avian piroplasm.