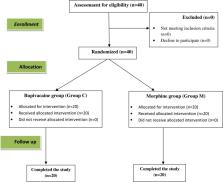 This work aimed at exploring the analgesic efficacy of morphine added to bupivacaine in SAPB in patients for whom modified radical mastectomy was conducted and whether it is a mere local effect.

Forty female patients were planned to have modified radical mastectomy participated in the study. Patients were randomly divided into two groups; Control group (C): received ultrasound-guided serratus anterior plane block with 20 mL of bupivacaine hydrochloride 0.25%; Morphine group (M): received the same in addition to 10 mg morphine sulfate. Intra- and post-operative blood samples were taken for the assessment of morphine serum levels. All patients were assessed for VAS scores during rest and movement (VAS-R and VAS-M). Time to the first request and the total amount of the rescue analgesia were recorded.

Ten mg of morphine, when added to bupivacaine in SAPB, improved postoperative analgesia in patients to whom modified radical mastectomy was conducted. This effect seems to be attributed merely to local mechanisms.

The registration number of this study is NCT02962024 at www.clinicaltrial.gov .

The control of pain in peripheral tissue by opioids.

Peripheral mechanisms of pain and analgesia.

Christoph Stein,  J. Clark,  Uhtaek Oh … (2009)
This review summarizes recent findings on peripheral mechanisms underlying the generation and inhibition of pain. The focus is on events occurring in peripheral injured tissues that lead to the sensitization and excitation of primary afferent neurons, and on the modulation of such mechanisms. Primary afferent neurons are of particular interest from a therapeutic perspective because they are the initial generator of noxious impulses traveling towards relay stations in the spinal cord and the brain. Thus, if one finds ways to inhibit the sensitization and/or excitation of peripheral sensory neurons, subsequent central events such as wind-up, sensitization and plasticity may be prevented. Most importantly, if agents are found that selectively modulate primary afferent function and do not cross the blood-brain-barrier, centrally mediated untoward side effects of conventional analgesics (e.g. opioids, anticonvulsants) may be avoided. This article begins with the peripheral actions of opioids, turns to a discussion of the effects of adrenergic co-adjuvants, and then moves on to a discussion of pro-inflammatory mechanisms focusing on TRP channels and nerve growth factor, their signaling pathways and arising therapeutic perspectives.

No funding was taken to accomplish this work.