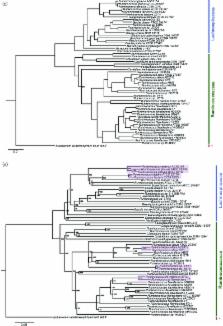 It has become increasingly clear that the composition of mammalian gut microbial communities is substantially diet driven. These microbiota form intricate mutualisms with their hosts, which have profound implications on overall health. For example, many gut microbes are involved in the conversion of host-ingested dietary polysaccharides into host-usable nutrients. One group of important gut microbial symbionts are bacteria in the genus Ruminococcus. Originally isolated from the bovine rumen, ruminococci have been found in numerous mammalian hosts, including other ruminants, and non-ruminants such as horses, pigs and humans. All ruminococci require fermentable carbohydrates for growth, and their substrate preferences appear to be based on the diet of their particular host. Most ruminococci that have been studied are those capable of degrading cellulose, much less is known about non-cellulolytic non-ruminant-associated species, and even less is known about the environmental distribution of ruminococci as a whole. Here, we capitalized on the wealth of publicly available 16S rRNA gene sequences, genomes and large-scale microbiota studies to both resolve the phylogenetic placement of described species in the genus Ruminococcus, and further demonstrate that this genus has largely unexplored diversity and a staggering host distribution. We present evidence that ruminococci are predominantly associated with herbivores and omnivores, and our data supports the hypothesis that very few ruminococci are found consistently in non-host-associated environments. This study not only helps to resolve the phylogeny of this important genus, but also provides a framework for understanding its distribution in natural systems.

When should a DDH experiment be mandatory in microbial taxonomy?

Jan Meier-Kolthoff,  Cathrin Spröer,  Markus Göker … (2013)
DNA-DNA hybridizations (DDH) play a key role in microbial species discrimination in cases when 16S rRNA gene sequence similarities are 97 % or higher. Using real-world 16S rRNA gene sequences and DDH data, we here re-investigate whether or not, and in which situations, this threshold value might be too conservative. Statistical estimates of these thresholds are calculated in general as well as more specifically for a number of phyla that are frequently subjected to DDH. Among several methods to infer 16S gene sequence similarities investigated, most of those routinely applied by taxonomists appear well suited for the task. The effects of using distinct DDH methods also seem to be insignificant. Depending on the investigated taxonomic group, a threshold between 98.2 and 99.0 % appears reasonable. In that way, up to half of the currently conducted DDH experiments could safely be omitted without a significant risk for wrongly differentiated species.

Relationships between phyllosphere bacterial communities and plant functional traits in a neotropical forest.

Steven Kembel,  Timothy O'Connor,  Holly K Arnold … (2014)
The phyllosphere--the aerial surfaces of plants, including leaves--is a ubiquitous global habitat that harbors diverse bacterial communities. Phyllosphere bacterial communities have the potential to influence plant biogeography and ecosystem function through their influence on the fitness and function of their hosts, but the host attributes that drive community assembly in the phyllosphere are poorly understood. In this study we used high-throughput sequencing to quantify bacterial community structure on the leaves of 57 tree species in a neotropical forest in Panama. We tested for relationships between bacterial communities on tree leaves and the functional traits, taxonomy, and phylogeny of their plant hosts. Bacterial communities on tropical tree leaves were diverse; leaves from individual trees were host to more than 400 bacterial taxa. Bacterial communities in the phyllosphere were dominated by a core microbiome of taxa including Actinobacteria, Alpha-, Beta-, and Gammaproteobacteria, and Sphingobacteria. Host attributes including plant taxonomic identity, phylogeny, growth and mortality rates, wood density, leaf mass per area, and leaf nitrogen and phosphorous concentrations were correlated with bacterial community structure on leaves. The relative abundances of several bacterial taxa were correlated with suites of host plant traits related to major axes of plant trait variation, including the leaf economics spectrum and the wood density-growth/mortality tradeoff. These correlations between phyllosphere bacterial diversity and host growth, mortality, and function suggest that incorporating information on plant-microbe associations will improve our ability to understand plant functional biogeography and the drivers of variation in plant and ecosystem function.

All supporting data, code and protocols have been provided within the article or through supplementary data files.