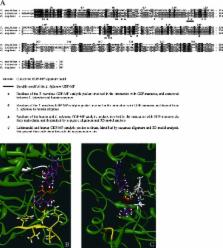 Leishmaniases are tropical and sub-tropical diseases for which classical drugs ( i.e. antimonials) exhibit toxicity and drug resistance. Such a situation requires to find new chemical series with antileishmanial activity. This work consists in analyzing the structure of a validated target in Leishmania: the GDP-mannose pyrophosphorylase (GDP-MP), an enzyme involved in glycosylation and essential for amastigote survival. By comparing both human and L. infantum GDP-MP 3D homology models, we identified (i) a common motif of amino acids that binds to the mannose moiety of the substrate and, interestingly, (ii) a motif that is specific to the catalytic site of the parasite enzyme. This motif could then be used to design compounds that specifically inhibit the leishmanial GDP-MP, without any effect on the human homolog.

Ajit Varki (2007)
All cells in nature are covered by a dense and complex array of carbohydrates. Given their prominence on cell surfaces, it is not surprising that these glycans mediate and/or modulate many cellular interactions. Proteins that bind sialic acid, a sugar that is found on the surface of the cell and on secreted proteins in vertebrates, are involved in a broad range of biological processes, including intercellular adhesion, signalling and microbial attachment. Studying the roles of such proteins in vertebrates has improved our understanding of normal physiology, disease and human evolution.

S Turco,  A Descoteaux (1999)
Leishmaniasis is a major health problem to humans and is caused by one of the world's major pathogens, the Leishmania parasite. These protozoa have the remarkable ability to avoid destruction in hostile environments they encounter throughout their life cycle. That Leishmania parasites have adapted to not only survive, but to proliferate largely is due to the protection conferred by unique glycoconjugates that are either on the parasites' cell surface or secreted. Most of these specialized molecules are members of a family of phosphoglycans while others are a family of glycosylinositol phospholipids. Together they have been implicated in a surprisingly large number of functions for the parasites throughout their life cycle and, therefore, are key players in their pathogenesis. This review summarizes the biological roles of these glycoconjugates and how they are believed to contribute to Leishmania survival in destructive surroundings.

Christopher Curtis,  John Parisot,  Lukasz Kedzierski … (2010)
The current treatment for leishmaniasis is based on chemotherapy, which relies on a handful of drugs with serious limitations, such as high cost, toxicity, and a lack of efficacy in regions of endemicity. Therefore, the development of new, effective, and affordable antileishmanial drugs is a global health priority. Leishmania synthesizes a range of mannose-rich glycoconjugates that are essential for parasite virulence and survival. A prerequisite for glycoconjugate biosynthesis is the conversion of monosaccharides to the activated mannose donor, GDP-mannose, the product of a reaction catalyzed by GDP-mannose pyrophosphorylase (GDP-MP). The deletion of the gene encoding GDP-MP in Leishmania led to a total loss of virulence, indicating that the enzyme is an ideal drug target. We developed a phosphate sensor-based high-throughput screening assay to quantify the activity of GDP-MP and screened a library containing approximately 80,000 lead-like compounds for GDP-MP inhibitors. On the basis of their GDP-MP inhibitory properties and chemical structures, the activities of 20 compounds which were not toxic to mammalian cells were tested against ex vivo amastigotes and in macrophage amastigote assays. The most potent compound identified in the primary screen (compound 3), a quinoline derivative, demonstrated dose-dependent activity in both assays (50% inhibitory concentration = 21.9 microM in the macrophage assay) and was shown to be nontoxic to human fibroblasts. In order to elucidate signs of an early structure-activity relationship (SAR) for this class of compounds, we obtained and tested analogues of compound 3 and undertook limited medicinal chemistry optimization, which included the use of a number of SAR probes of the piperazinyl aryl substituent of compound 3. We have identified novel candidate compounds for the design and synthesis of antileishmanial therapeutics.