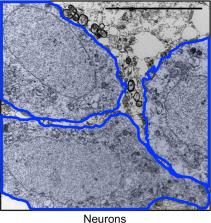 Johannes Schindelin,  Ignacio Arganda-Carreras,  Erwin Frise … (2012)
Fiji is a distribution of the popular open-source software ImageJ focused on biological-image analysis. Fiji uses modern software engineering practices to combine powerful software libraries with a broad range of scripting languages to enable rapid prototyping of image-processing algorithms. Fiji facilitates the transformation of new algorithms into ImageJ plugins that can be shared with end users through an integrated update system. We propose Fiji as a platform for productive collaboration between computer science and biology research communities.

T.J.B. and A.A. performed most of the experiments. C.F.M. assisted with the senescent cell identification by Gal-TEM and FACS. B.L.S. performed IHC assessments. J.v.D. assisted with experimental design and data interpretation. The manuscript was written by T.J.B. and D.J.B. All authors discussed results, made figures, and edited the manuscript. D.J.B. conceived, directed and supervised all aspects of the study.

Reprints and permissions information is available at www.nature.com/reprints. D.J.B. is a co-inventor on patent applications licensed to or filed by Unity Biotechnology, a company developing senolytic medicines, including small molecules that selectively eliminate senescent cells. Research in his lab has been reviewed by the Mayo Clinic Conflict of Interest Review Board and is being conducted in compliance with Mayo Clinic Conflict of Interest policies.