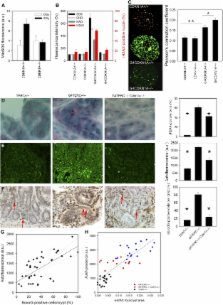 The phenomenon of cellular ‘senescence'—the permanent arrest of division in normally proliferating mammalian cells such as fibroblasts—is thought to be a central component of the ageing process. Senescence contributes both to age-related loss of tissue homeostasis, as the loss of division capacity leads to impaired cell renewal, and also to protect against cancer, because it acts to block the uncontrolled proliferation of cells that may give rise to a malignant tumour. Replicative senescence is triggered by uncapped telomeres or by ‘unrepairable' non-telomeric DNA damage. Both lesions initiate the same canonical DNA damage response (DDR) ( d'Adda di Fagagna, 2008). This response is characterized by activation of sensor kinases (ATM/ATR, DNA-PK), formation of DNA damage foci containing activated H2A.X (γH2A.X) and ultimately induction of cell cycle arrest through activation of checkpoint proteins, notably p53 (TP53) and the CDK inhibitor p21 (CDKN1A). This signalling pathway continues to contribute actively to the stability of the G0 arrest in fully senescent cells long after induction of senescence ( d'Adda di Fagagna et al, 2003). However, senescence is more complex than mere CDKI-mediated growth arrest. Senescent cells alter their expression of literally hundreds of genes ( Shelton et al, 1999), prominent among these being pro-inflammatory secretory genes ( Coppe et al, 2008) and marker genes for a retrograde response induced by mitochondrial dysfunction ( Passos et al, 2007a).

There is a growing evidence that multiple mechanisms interact to underpin ageing at the cellular level ( Kirkwood, 2005; Passos et al, 2007b) necessitating a systems biology approach if the complex mechanisms of ageing are to be understood ( Kirkwood, 2008). With respect to cell senescence, the two major unanswered questions are (i) How does a DNA lesion that can be repaired, at least in principle, induce and maintain irreversible growth arrest? and (ii) How does a growth arrest trigger a completely different cellular phenotype as soon as it becomes irreversible?

To understand those questions, we performed a kinetic analysis of the establishment phase of senescence initiated by DNA damage or telomere dysfunction, focussing on pathways downstream of the classical DDR. Using an approach that combined (i) in-silico interactome analysis, (ii) functional target gene inhibition, (iii) stochastic modelling, and (iv) live cell microscopy, we identified a positive feedback loop between DDR and mitochondrial production of reactive oxygen species (ROS) as necessary and sufficient for long-term maintenance of growth arrest. Using pathway log likelihood scores calculated by a quantitative in-silico interactome analysis to guide siRNA and small molecule inhibition experiments, and using results of sequential and combined inhibition experiments to refine the predictions from the interactome analysis, we found that DDR triggered mitochondrial dysfunction leading to enhanced ROS activation through a linear signal transduction through TP53, CDKN1A, GADD45A, p38 (MAPK14), GRB2, TGFBR2 and TGFβ( Figure 2D). We hypothesized that these ROS stochastically generate novel DNA damage in the nucleus, thus forming a positive feedback loop contributing to the long-term maintenance of DDR ( Figure 3A). First confirmation came from static inhibitor experiments as before, showing that nuclear DNA damage foci frequencies in senescent cells were reduced if feedback signalling was suppressed. To formally establish the existence of a feedback loop and its relevance for senescence, we used live cell microscopy in combination with quantitative modelling.

We transformed the conceptual model shown in Figure 3A into a stochastic mechanistic model of the DDR feedback loop by extending the previously published model of the TP53/Mdm2 circuit ( Proctor and Gray, 2008) to include reactions for synthesis/activation and degradation/deactivation/repair of CDKN1A, GADD45, MAPK14, ROS and DNA damage. The model replicated very precisely the kinetic behaviour of activated TP53, CDKN1A, ROS and DNA damage foci after initiation of senescence by irradiation. Having established its concordance with the experimental data, the model was then used to predict the effects of intervening in the feedback loop. The model predicted that any intervention reducing ROS levels by about half would decrease average DNA damage foci frequencies from six to four foci/nucleus within about 15 h. It further predicted that this would be sufficient to reduce CDKN1A to basal levels continuously for at least 6 h in about 20% of the treated cells, thus allowing a significant fraction of cells to escape from growth arrest and to resume proliferation. This should happen even if the intervention into the feedback loop was started at a late time point (e.g. 6 days) after induction of senescence.

Finally, we inhibited signalling through the loop at different time points after induction of senescence by ionizing radiation and measured ROS levels, DNA damage foci frequencies and proliferation markers. Treatments with the MAPK14 inhibitor SB203580 or the free radical scavenger PBN were used to block the loop. The results quantitatively confirmed the model prediction and indicated that the feedback loop between DDR and ROS production was both necessary and sufficient to maintain cell cycle arrest for at least 6–10 days after induction of senescence. Interestingly, the loop was still active at later time points and in deep senescence, but proliferation arrest was then stabilized by additional factor(s). This indicated that certain features of the senescent phenotype-like ROS production that might be responsible for the negative impact of senescent cells into their tissue environment can be successfully inhibited even in deep senescence. This may prove relevant for novel therapeutic studies aiming to modulate intracellular ROS levels in both aging and cancer.

Cellular senescence—the permanent arrest of cycling in normally proliferating cells such as fibroblasts—contributes both to age-related loss of mammalian tissue homeostasis and acts as a tumour suppressor mechanism. The pathways leading to establishment of senescence are proving to be more complex than was previously envisaged. Combining in-silico interactome analysis and functional target gene inhibition, stochastic modelling and live cell microscopy, we show here that there exists a dynamic feedback loop that is triggered by a DNA damage response (DDR) and, which after a delay of several days, locks the cell into an actively maintained state of ‘deep' cellular senescence. The essential feature of the loop is that long-term activation of the checkpoint gene CDKN1A (p21) induces mitochondrial dysfunction and production of reactive oxygen species (ROS) through serial signalling through GADD45-MAPK14(p38MAPK)-GRB2-TGFBR2-TGFβ. These ROS in turn replenish short-lived DNA damage foci and maintain an ongoing DDR. We show that this loop is both necessary and sufficient for the stability of growth arrest during the establishment of the senescent phenotype.

Thomas von Zglinicki (2002)
Telomeres in most human cells shorten with each round of DNA replication, because they lack the enzyme telomerase. This is not, however, the only determinant of the rate of loss of telomeric DNA. Oxidative damage is repaired less well in telomeric DNA than elsewhere in the chromosome, and oxidative stress accelerates telomere loss, whereas antioxidants decelerate it. I suggest here that oxidative stress is an important modulator of telomere loss and that telomere-driven replicative senescence is primarily a stress response. This might have evolved to block the growth of cells that have been exposed to a high risk of mutation.

Maria V. Guijarro,  Yoshihiro Takatsu,  Marco Costa … (2008)
Cells enter senescence, a state of stable proliferative arrest, in response to a variety of cellular stresses, including telomere erosion, DNA damage, and oncogenic signaling, which acts as a barrier against malignant transformation in vivo. To identify genes controlling senescence, we conducted an unbiased screen for small hairpin RNAs that extend the life span of primary human fibroblasts. Here, we report that knocking down the chemokine receptor CXCR2 (IL8RB) alleviates both replicative and oncogene-induced senescence (OIS) and diminishes the DNA-damage response. Conversely, ectopic expression of CXCR2 results in premature senescence via a p53-dependent mechanism. Cells undergoing OIS secrete multiple CXCR2-binding chemokines in a program that is regulated by the NF-kappaB and C/EBPbeta transcription factors and coordinately induce CXCR2 expression. CXCR2 upregulation is also observed in preneoplastic lesions in vivo. These results suggest that senescent cells activate a self-amplifying secretory network in which CXCR2-binding chemokines reinforce growth arrest.

This is an open-access article distributed under the terms of the Creative Commons Attribution Licence, which permits distribution and reproduction in any medium, provided the original author and source are credited. This licence does not permit commercial exploitation or the creation of derivative works without specific permission.