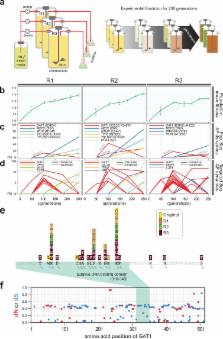 We studied adaptive evolution of gene expression using long-term experimental evolution of Saccharomyces cerevisiae in ammonium-limited chemostats. We found repeated selection for non-synonymous variation in the DNA binding domain of the transcriptional activator, GAT1, which functions with the repressor, DAL80 in an incoherent type-1 feedforward loop (I1-FFL) to control expression of the high affinity ammonium transporter gene, MEP2. Missense mutations in the DNA binding domain of GAT1 reduce its binding to the GATAA consensus sequence. However, we show experimentally, and using mathematical modeling, that decreases in GAT1 binding result in increased expression of MEP2 as a consequence of properties of I1-FFLs. Our results show that I1-FFLs, one of the most commonly occurring network motifs in transcriptional networks, can facilitate adaptive tuning of gene expression through modulation of transcription factor binding affinities. Our findings highlight the importance of gene regulatory architectures in the evolution of gene expression.

Network motifs in the transcriptional regulation network of Escherichia coli.

Shai Shen-Orr,  Ron Milo,  Shmoolik Mangan … (2002)
Little is known about the design principles of transcriptional regulation networks that control gene expression in cells. Recent advances in data collection and analysis, however, are generating unprecedented amounts of information about gene regulation networks. To understand these complex wiring diagrams, we sought to break down such networks into basic building blocks. We generalize the notion of motifs, widely used for sequence analysis, to the level of networks. We define 'network motifs' as patterns of interconnections that recur in many different parts of a network at frequencies much higher than those found in randomized networks. We applied new algorithms for systematically detecting network motifs to one of the best-characterized regulation networks, that of direct transcriptional interactions in Escherichia coli. We find that much of the network is composed of repeated appearances of three highly significant motifs. Each network motif has a specific function in determining gene expression, such as generating temporal expression programs and governing the responses to fluctuating external signals. The motif structure also allows an easily interpretable view of the entire known transcriptional network of the organism. This approach may help define the basic computational elements of other biological networks.

Gianni Liti,  David Carter,  Alan M. Moses … (2009)
Since the completion of the genome sequence of Saccharomyces cerevisiae in 19961,2, there has been an exponential increase in complete genome sequences accompanied by great advances in our understanding of genome evolution. Although little is known about the natural and life histories of yeasts in the wild, there are an increasing number of studies looking at ecological and geographic distributions3,4, population structure5-8, and sexual versus asexual reproduction9,10. Less well understood at the whole genome level are the evolutionary processes acting within populations and species leading to adaptation to different environments, phenotypic differences and reproductive isolation. Here we present one- to four-fold or more coverage of the genome sequences of over seventy isolates of the baker's yeast, S. cerevisiae, and its closest relative, S. paradoxus. We examine variation in gene content, SNPs, indels, copy numbers and transposable elements. We find that phenotypic variation broadly correlates with global genome-wide phylogenetic relationships. Interestingly, S. paradoxus populations are well delineated along geographic boundaries while the variation among worldwide S. cerevisiae isolates shows less differentiation and is comparable to a single S. paradoxus population. Rather than one or two domestication events leading to the extant baker's yeasts, the population structure of S. cerevisiae consists of a few well-defined geographically isolated lineages and many different mosaics of these lineages, supporting the idea that human influence provided the opportunity for cross-breeding and production of new combinations of pre-existing variation.