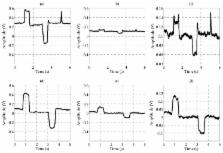 Amyotrophic lateral sclerosis (ALS) patients whose voluntary muscles are paralyzed commonly communicate with the outside world using eye movement. There have been many efforts to support this method of communication by tracking or detecting eye movement. An electrooculogram (EOG), an electro-physiological signal, is generated by eye movements and can be measured with electrodes placed around the eye. In this study, we proposed a new practical electrode position on the forehead to measure EOG signals, and we developed a wearable forehead EOG measurement system for use in Human Computer/Machine interfaces (HCIs/HMIs). Four electrodes, including the ground electrode, were placed on the forehead. The two channels were arranged vertically and horizontally, sharing a positive electrode. Additionally, a real-time eye movement classification algorithm was developed based on the characteristics of the forehead EOG. Three applications were employed to evaluate the proposed system: a virtual keyboard using a modified Bremen BCI speller and an automatic sequential row-column scanner, and a drivable power wheelchair. The mean typing speeds of the modified Bremen brain–computer interface (BCI) speller and automatic row-column scanner were 10.81 and 7.74 letters per minute, and the mean classification accuracies were 91.25% and 95.12%, respectively. In the power wheelchair demonstration, the user drove the wheelchair through an 8-shape course without collision with obstacles.

Talking off the top of your head: toward a mental prosthesis utilizing event-related brain potentials

Han-Jeong Hwang,  Jeong-Hwan Lim,  Young-Jin Jung … (2012)
In this study, we introduce a new mental spelling system based on steady-state visual evoked potential (SSVEP), adopting a QWERTY style layout keyboard with 30 LEDs flickering with different frequencies. The proposed electroencephalography (EEG)-based mental spelling system allows the users to spell one target character per each target selection, without the need for multiple step selections adopted by conventional SSVEP-based mental spelling systems. Through preliminary offline experiments and online experiments, we confirmed that human SSVEPs elicited by visual flickering stimuli with a frequency resolution of 0.1 Hz could be classified with classification accuracy high enough to be used for a practical brain-computer interface (BCI) system. During the preliminary offline experiments performed with five participants, we optimized various factors influencing the performance of the mental spelling system, such as distances between adjacent keys, light source arrangements, stimulating frequencies, recording electrodes, and visual angles. Additional online experiments were conducted with six participants to verify the feasibility of the optimized mental spelling system. The results of the online experiments were an average typing speed of 9.39 letters per minute (LPM) with an average success rate of 87.58%, corresponding to an average information transfer rate of 40.72 bits per minute, demonstrating the high performance of the developed mental spelling system. Indeed, the average typing speed of 9.39 LPM attained in this study was one of the best LPM results among those reported in previous BCI literatures. Copyright © 2012 Elsevier B.V. All rights reserved.