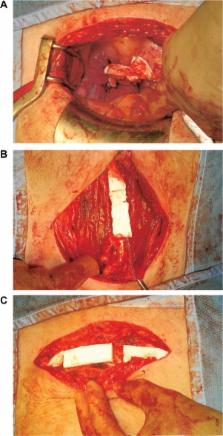 XaraColl ®, a collagen-based intraoperative implant that delivers bupivacaine to the site of surgical trauma, is under development for postoperative analgesia. We examined the pharmacokinetics, safety and efficacy of XaraColl following implantation in women undergoing total abdominal hysterectomy.

Three XaraColl implants, each containing 50 mg bupivacaine hydrochloride, were implanted in 12 women undergoing total abdominal hysterectomy for a benign condition. Serum samples were obtained through 96 hours for pharmacokinetic analysis. Patients received acetaminophen 1000 mg every 6 hours, diclofenac 50 mg every 8 hours, and were given access to intravenous morphine for breakthrough pain via patient-controlled analgesia during the first 24 hours. Pain intensity was assessed at regular intervals using a 100 mm visual analog scale. Safety was assessed through 30 days.

The pharmacokinetic profile displayed a double peak in bupivacaine concentration with the second peak occurring up to 24 hours after the first and at a generally higher concentration. The time to maximum concentration (t max) varied from 0.5 to 24 hours (median 12 hours) according to which peak predominated. The mean maximum concentration (C max) was 0.22 μg/mL and the maximum individual C max was 0.44 μg/mL, which are well below the established systemic toxicity threshold. Morphine use was generally low (mean 16.8 mg; median 6.5 mg) and compared favorably with institutional experience. At 6 hours post-surgery, 11 patients recorded pain scores ≤ 20 mm, 6 recorded ≤ 10 mm, and 2 reported no pain. Scores continued to decline throughout the study. The product was considered safe and well tolerated.

XaraColl exhibits a biphasic and sustained release profile that may provide a significant advance over standard wound infiltration. Considering the encouraging results from this study alongside those from other randomized controlled efficacy trials, XaraColl should be further evaluated as a postoperative analgesic in large, double-blind efficacy trials.

Srinivasa N. Raja,  Helen L Wu (2011)
Although postoperative pain remains incompletely controlled in some settings, increased understanding of its mechanisms and the development of several therapeutic approaches have substantially improved pain control in past years. Advances in our understanding of the process of nociception have led to insight into gene-based pain therapy, the development of acute opioid-induced hyperalgesia, and persistent postsurgical pain. Use of specific analgesic techniques such as regional analgesia could improve patient outcomes. We also examine the development of new analgesic agents and treatment modalities and regimens for acute postoperative pain. Copyright © 2011 Elsevier Ltd. All rights reserved.

Improving postoperative pain management: what are the unresolved issues?

Guido Fanelli,  S. Leone,  Simone Di Pietro … (2008)
Levobupivacaine and ropivacaine, two new long-acting local anesthetics, have been developed as an alternative to bupivacaine, after the evidence of its severe toxicity. Both of these agents are pure left-isomers and, due to their three-dimensional structure, seem to have less toxic effects on the central nervous system and on the cardiovascular system. Many clinical studies have investigated their toxicology and clinical profiles: theoretically and experimentally, some differences have been observed, but the effects of these properties on clinical practice have not been shown. By examining randomised, controlled trials that have compared these three local agents, this review supports the evidence that both levobupivacaine and ropivacaine have a clinical profile similar to that of racemic bupivacaine, and that the minimal differences reported between the three anesthetics are mainly related to the slightly different anesthetic potency, with racemic bupivacaine > levobupivacaine > ropivacaine. However, the reduced toxic potential of the two pure left-isomers suggests their use in the clinical situations in which the risk of systemic toxicity related to either overdosing or unintended intravascular injection is high, such as during epidural or peripheral nerve blocks.