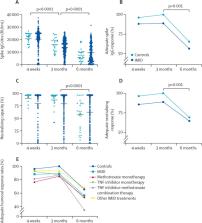 Einav Levin, Yaniv Lustig, Carmit Cohen … (2021)
Background Despite high vaccine coverage and effectiveness, the incidence of symptomatic infection with severe acute respiratory syndrome coronavirus 2 (SARS-CoV-2) has been increasing in Israel. Whether the increasing incidence of infection is due to waning immunity after the receipt of two doses of the BNT162b2 vaccine is unclear. Methods We conducted a 6-month longitudinal prospective study involving vaccinated health care workers who were tested monthly for the presence of anti-spike IgG and neutralizing antibodies. Linear mixed models were used to assess the dynamics of antibody levels and to determine predictors of antibody levels at 6 months. Results The study included 4868 participants, with 3808 being included in the linear mixed-model analyses. The level of IgG antibodies decreased at a consistent rate, whereas the neutralizing antibody level decreased rapidly for the first 3 months with a relatively slow decrease thereafter. Although IgG antibody levels were highly correlated with neutralizing antibody titers (Spearman’s rank correlation between 0.68 and 0.75), the regression relationship between the IgG and neutralizing antibody levels depended on the time since receipt of the second vaccine dose. Six months after receipt of the second dose, neutralizing antibody titers were substantially lower among men than among women (ratio of means, 0.64; 95% confidence interval [CI], 0.55 to 0.75), lower among persons 65 years of age or older than among those 18 to less than 45 years of age (ratio of means, 0.58; 95% CI, 0.48 to 0.70), and lower among participants with immunosuppression than among those without immunosuppression (ratio of means, 0.30; 95% CI, 0.20 to 0.46). Conclusions Six months after receipt of the second dose of the BNT162b2 vaccine, humoral response was substantially decreased, especially among men, among persons 65 years of age or older, and among persons with immunosuppression.

Immunogenicity and safety of the BNT162b2 mRNA COVID-19 vaccine in adult patients with autoimmune inflammatory rheumatic diseases and in the general population: a multicentre study

Victoria Furer, Tali Eviatar, Devy Zisman … (2021)
Introduction Vaccination represents a cornerstone in mastering the COVID-19 pandemic. Data on immunogenicity and safety of messenger RNA (mRNA) vaccines in patients with autoimmune inflammatory rheumatic diseases (AIIRD) are limited. Methods A multicentre observational study evaluated the immunogenicity and safety of the two-dose regimen BNT162b2 mRNA vaccine in adult patients with AIIRD (n=686) compared with the general population (n=121). Serum IgG antibody levels against SARS-CoV-2 spike S1/S2 proteins were measured 2–6 weeks after the second vaccine dose. Seropositivity was defined as IgG ≥15 binding antibody units (BAU)/mL. Vaccination efficacy, safety, and disease activity were assessed within 6 weeks after the second vaccine dose. Results Following vaccination, the seropositivity rate and S1/S2 IgG levels were significantly lower among patients with AIIRD versus controls (86% (n=590) vs 100%, p<0.0001 and 132.9±91.7 vs 218.6±82.06 BAU/mL, p<0.0001, respectively). Risk factors for reduced immunogenicity included older age and treatment with glucocorticoids, rituximab, mycophenolate mofetil (MMF), and abatacept. Rituximab was the main cause of a seronegative response (39% seropositivity). There were no postvaccination symptomatic cases of COVID-19 among patients with AIIRD and one mild case in the control group. Major adverse events in patients with AIIRD included death (n=2) several weeks after the second vaccine dose, non-disseminated herpes zoster (n=6), uveitis (n=2), and pericarditis (n=1). Postvaccination disease activity remained stable in the majority of patients. Conclusion mRNA BNTb262 vaccine was immunogenic in the majority of patients with AIIRD, with an acceptable safety profile. Treatment with glucocorticoids, rituximab, MMF, and abatacept was associated with a significantly reduced BNT162b2-induced immunogenicity.

Effect of methotrexate, anti-tumor necrosis factor α, and rituximab on the immune response to influenza and pneumococcal vaccines in patients with rheumatoid arthritis: a systematic review and meta-analysis.