In vivo experience with natural scaffolds for myocardial infarction: the times they are a-changin’ 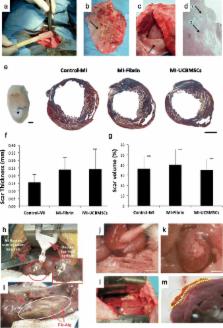 Treating a myocardial infarction (MI), the most frequent cause of death worldwide, remains one of the most exciting medical challenges in the 21st century. Cardiac tissue engineering, a novel emerging treatment, involves the use of therapeutic cells supported by a scaffold for regenerating the infarcted area. It is essential to select the appropriate scaffold material; the ideal one should provide a suitable cellular microenvironment, mimic the native myocardium, and allow mechanical and electrical coupling with host tissues. Among available scaffold materials, natural scaffolds are preferable for achieving these purposes because they possess myocardial extracellular matrix properties and structures. Here, we review several natural scaffolds for applications in MI management, with a focus on pre-clinical studies and clinical trials performed to date. We also evaluate scaffolds combined with different cell types and proteins for their ability to promote improved heart function, contractility and neovascularization, and attenuate adverse ventricular remodeling. Although further refinement is necessary in the coming years, promising results indicate that natural scaffolds may be a valuable translational therapeutic option with clinical impact in MI repair.

Heart disease and stroke statistics--2015 update: a report from the American Heart Association.

Remodelling the extracellular matrix in development and disease.

Caroline Bonnans,  Jonathan Chou,  Zena Werb (2014)
The extracellular matrix (ECM) is a highly dynamic structure that is present in all tissues and continuously undergoes controlled remodelling. This process involves quantitative and qualitative changes in the ECM, mediated by specific enzymes that are responsible for ECM degradation, such as metalloproteinases. The ECM interacts with cells to regulate diverse functions, including proliferation, migration and differentiation. ECM remodelling is crucial for regulating the morphogenesis of the intestine and lungs, as well as of the mammary and submandibular glands. Dysregulation of ECM composition, structure, stiffness and abundance contributes to several pathological conditions, such as fibrosis and invasive cancer. A better understanding of how the ECM regulates organ structure and function and of how ECM remodelling affects disease progression will contribute to the development of new therapeutics.

RGD and other recognition sequences for integrins.

E Ruoslahti (1995)
Proteins that contain the Arg-Gly-Asp (RGD) attachment site, together with the integrins that serve as receptors for them, constitute a major recognition system for cell adhesion. The RGD sequence is the cell attachment site of a large number of adhesive extracellular matrix, blood, and cell surface proteins, and nearly half of the over 20 known integrins recognize this sequence in their adhesion protein ligands. Some other integrins bind to related sequences in their ligands. The integrin-binding activity of adhesion proteins can be reproduced by short synthetic peptides containing the RGD sequence. Such peptides promote cell adhesion when insolubilized onto a surface, and inhibit it when presented to cells in solution. Reagents that bind selectively to only one or a few of the RGD-directed integrins can be designed by cyclizing peptides with selected sequences around the RGD and by synthesizing RGD mimics. As the integrin-mediated cell attachment influences and regulates cell migration, growth, differentiation, and apoptosis, the RGD peptides and mimics can be used to probe integrin functions in various biological systems. Drug design based on the RGD structure may provide new treatments for diseases such as thrombosis, osteoporosis, and cancer.