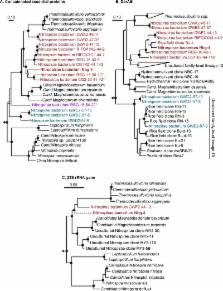 Nitrospirae spp. distantly related to thermophilic, sulfate-reducing Thermodesulfovibrio species are regularly observed in environmental surveys of anoxic marine and freshwater habitats. Here we present a metaproteogenomic analysis of Nitrospirae bacterium Nbg-4 as a representative of this clade. Its genome was assembled from replicated metagenomes of rice paddy soil that was used to grow rice in the presence and absence of gypsum (CaSO 4·2H 2O). Nbg-4 encoded the full pathway of dissimilatory sulfate reduction and showed expression of this pathway in gypsum-amended anoxic bulk soil as revealed by parallel metaproteomics. In addition, Nbg-4 encoded the full pathway of dissimilatory nitrate reduction to ammonia (DNRA), with expression of its first step being detected in bulk soil without gypsum amendment. The relative abundances of Nbg-4 were similar under both treatments, indicating that Nbg-4 maintained stable populations while shifting its energy metabolism. Whether Nbg-4 is a strict sulfate reducer or can couple sulfur oxidation to DNRA by operating the pathway of dissimilatory sulfate reduction in reverse could not be resolved. Further genome reconstruction revealed the potential to utilize butyrate, formate, H 2, or acetate as an electron donor; the Wood-Ljungdahl pathway was expressed under both treatments. Comparison to publicly available Nitrospirae genome bins revealed the pathway for dissimilatory sulfate reduction also in related Nitrospirae recovered from groundwater. Subsequent phylogenomics showed that such microorganisms form a novel genus within the Nitrospirae, with Nbg-4 as a representative species. Based on the widespread occurrence of this novel genus, we propose for Nbg-4 the name “ Candidatus Sulfobium mesophilum,” gen. nov., sp. nov.

IMPORTANCE Rice paddies are indispensable for the food supply but are a major source of the greenhouse gas methane. If it were not counterbalanced by cryptic sulfur cycling, methane emission from rice paddy fields would be even higher. However, the microorganisms involved in this sulfur cycling are little understood. By using an environmental systems biology approach with Italian rice paddy soil, we could retrieve the population genome of a novel member of the phylum Nitrospirae. This microorganism encoded the full pathway of dissimilatory sulfate reduction and expressed it in anoxic paddy soil under sulfate-enriched conditions. Phylogenomics and comparison to the results of environmental surveys showed that such microorganisms are actually widespread in freshwater and marine environments. At the same time, they represent an undiscovered genus within the little-explored phylum Nitrospirae. Our results will be important for the design of enrichment strategies and postgenomic studies to further understanding of the contribution of these novel Nitrospirae spp. to the global sulfur cycle.

The ecology and biotechnology of sulphate-reducing bacteria.

Alfons Stams,  Gerard Muyzer (2008)
Sulphate-reducing bacteria (SRB) are anaerobic microorganisms that use sulphate as a terminal electron acceptor in, for example, the degradation of organic compounds. They are ubiquitous in anoxic habitats, where they have an important role in both the sulphur and carbon cycles. SRB can cause a serious problem for industries, such as the offshore oil industry, because of the production of sulphide, which is highly reactive, corrosive and toxic. However, these organisms can also be beneficial by removing sulphate and heavy metals from waste streams. Although SRB have been studied for more than a century, it is only with the recent emergence of new molecular biological and genomic techniques that we have begun to obtain detailed information on their way of life.

David Vallenet,  Laurent Labarre,  Zoe Rouy … (2006)
Magnifying Genomes (MaGe) is a microbial genome annotation system based on a relational database containing information on bacterial genomes, as well as a web interface to achieve genome annotation projects. Our system allows one to initiate the annotation of a genome at the early stage of the finishing phase. MaGe's main features are (i) integration of annotation data from bacterial genomes enhanced by a gene coding re-annotation process using accurate gene models, (ii) integration of results obtained with a wide range of bioinformatics methods, among which exploration of gene context by searching for conserved synteny and reconstruction of metabolic pathways, (iii) an advanced web interface allowing multiple users to refine the automatic assignment of gene product functions. MaGe is also linked to numerous well-known biological databases and systems. Our system has been thoroughly tested during the annotation of complete bacterial genomes (Acinetobacter baylyi ADP1, Pseudoalteromonas haloplanktis, Frankia alni) and is currently used in the context of several new microbial genome annotation projects. In addition, MaGe allows for annotation curation and exploration of already published genomes from various genera (e.g. Yersinia, Bacillus and Neisseria). MaGe can be accessed at .

Biochemistry and molecular biology of lithotrophic sulfur oxidation by taxonomically and ecologically diverse bacteria and archaea.

Erik Dam,  Wriddhiman Ghosh (2009)
Lithotrophic sulfur oxidation is an ancient metabolic process. Ecologically and taxonomically diverged prokaryotes have differential abilities to utilize different reduced sulfur compounds as lithotrophic substrates. Different phototrophic or chemotrophic species use different enzymes, pathways and mechanisms of electron transport and energy conservation for the oxidation of any given substrate. While the mechanisms of sulfur oxidation in obligately chemolithotrophic bacteria, predominantly belonging to Beta- (e.g. Thiobacillus) and Gammaproteobacteria (e.g. Thiomicrospira), are not well established, the Sox system is the central pathway in the facultative bacteria from Alphaproteobacteria (e.g. Paracoccus). Interestingly, photolithotrophs such as Rhodovulum belonging to Alphaproteobacteria also use the Sox system, whereas those from Chromatiaceae and Chlorobi use a truncated Sox complex alongside reverse-acting sulfate-reducing systems. Certain chemotrophic magnetotactic Alphaproteobacteria allegedly utilize such a combined mechanism. Sulfur-chemolithotrophic metabolism in Archaea, largely restricted to Sulfolobales, is distinct from those in Bacteria. Phylogenetic and biomolecular fossil data suggest that the ubiquity of sox genes could be due to horizontal transfer, and coupled sulfate reduction/sulfide oxidation pathways, originating in planktonic ancestors of Chromatiaceae or Chlorobi, could be ancestral to all sulfur-lithotrophic processes. However, the possibility that chemolithotrophy, originating in deep sea, is the actual ancestral form of sulfur oxidation cannot be ruled out.

S.Z. and R.C.M. contributed equally to this article.