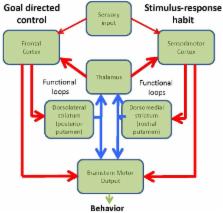 A neural substrate of prediction and reward.

Wolfram Schultz,  Peter Dayan,  Nicholas P. Montague (1997)
The capacity to predict future events permits a creature to detect, model, and manipulate the causal structure of its interactions with its environment. Behavioral experiments suggest that learning is driven by changes in the expectations about future salient events such as rewards and punishments. Physiological work has recently complemented these studies by identifying dopaminergic neurons in the primate whose fluctuating output apparently signals changes or errors in the predictions of future salient and rewarding events. Taken together, these findings can be understood through quantitative theories of adaptive optimizing control.

William Dauer,  Serge Przedborski (2003)
Parkinson's disease (PD) results primarily from the death of dopaminergic neurons in the substantia nigra. Current PD medications treat symptoms; none halt or retard dopaminergic neuron degeneration. The main obstacle to developing neuroprotective therapies is a limited understanding of the key molecular events that provoke neurodegeneration. The discovery of PD genes has led to the hypothesis that misfolding of proteins and dysfunction of the ubiquitin-proteasome pathway are pivotal to PD pathogenesis. Previously implicated culprits in PD neurodegeneration, mitochondrial dysfunction and oxidative stress, may also act in part by causing the accumulation of misfolded proteins, in addition to producing other deleterious events in dopaminergic neurons. Neurotoxin-based models (particularly MPTP) have been important in elucidating the molecular cascade of cell death in dopaminergic neurons. PD models based on the manipulation of PD genes should prove valuable in elucidating important aspects of the disease, such as selective vulnerability of substantia nigra dopaminergic neurons to the degenerative process.

Mike A Nalls,  Nathan Pankratz,  Christina Lill … (2014)
We conducted a meta analysis of Parkinson’s disease genome-wide association studies using a common set of 7,893,274 variants across 13,708 cases and 95,282 controls. Twenty-six loci were identified as genome-wide significant; these and six additional previously reported loci were then tested in an independent set of 5,353 cases and 5,551 controls. Of the 32 tested SNPs, 24 replicated, including 6 novel loci. Conditional analyses within loci show four loci including GBA, GAK/DGKQ, SNCA, and HLA contain a secondary independent risk variant. In total we identified and replicated 28 independent risk variants for Parkinson disease across 24 loci. While the effect of each individual locus is small, a risk profile analysis revealed a substantial cummulative risk in a comparison highest versus lowest quintiles of genetic risk (OR=3.31, 95% CI: 2.55, 4.30; p-value = 2×10−16). We also show 6 risk loci associated with proximal gene expression or DNA methylation.