The Plasticizer Bisphenol A Perturbs the Hepatic Epigenome: A Systems Level Analysis of the miRNome 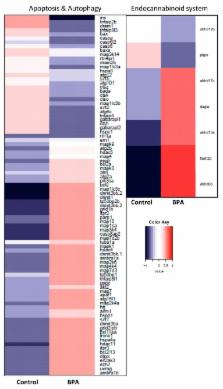 Ubiquitous exposure to bisphenol A (BPA), an endocrine disruptor (ED), has raised concerns for both human and ecosystem health. Epigenetic factors, including microRNAs (miRNAs), are key regulators of gene expression during cancer. The effect of BPA exposure on the zebrafish epigenome remains poorly characterized. Zebrafish represents an excellent model to study cancer as the organism develops a disease that resembles human cancer. Using zebrafish as a systems toxicology model, we hypothesized that chronic BPA-exposure impacts the miRNome in adult zebrafish and establishes an epigenome more susceptible to cancer development. After a 3 week exposure to 100 nM BPA, RNA from the liver was extracted to perform high throughput mRNA and miRNA sequencing. Differential expression (DE) analyses comparing BPA-exposed to control specimens were performed using established bioinformatics pipelines. In the BPA-exposed liver, 6188 mRNAs and 15 miRNAs were differently expressed ( q ≤ 0.1). By analyzing human orthologs of the DE zebrafish genes, signatures associated with non-alcoholic fatty liver disease (NAFLD), oxidative phosphorylation, mitochondrial dysfunction and cell cycle were uncovered. Chronic exposure to BPA has a significant impact on the liver miRNome and transcriptome in adult zebrafish with the potential to cause adverse health outcomes including cancer.

Systematic discovery of regulatory motifs in human promoters and 3' UTRs by comparison of several mammals.

Xiaohui Xie,  Eric S. Lander,  Kerstin Lindblad-Toh … (2005)
Comprehensive identification of all functional elements encoded in the human genome is a fundamental need in biomedical research. Here, we present a comparative analysis of the human, mouse, rat and dog genomes to create a systematic catalogue of common regulatory motifs in promoters and 3' untranslated regions (3' UTRs). The promoter analysis yields 174 candidate motifs, including most previously known transcription-factor binding sites and 105 new motifs. The 3'-UTR analysis yields 106 motifs likely to be involved in post-transcriptional regulation. Nearly one-half are associated with microRNAs (miRNAs), leading to the discovery of many new miRNA genes and their likely target genes. Our results suggest that previous estimates of the number of human miRNA genes were low, and that miRNAs regulate at least 20% of human genes. The overall results provide a systematic view of gene regulation in the human, which will be refined as additional mammalian genomes become available.