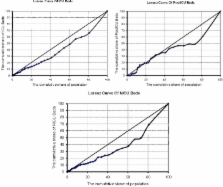 The purpose of the present study was to evaluate the inequality of geographical distribution of non-cardiac intensive care beds in Iran using the Gini coefficient.

The population information of Iran’s provinces in 2006 was obtained from The Statistical Center of Iran and the number of non-cardiac intensive care beds (including ICU, PostICU and NICU beds) in all provinces was taken from published information of Ministry of Health and Medical Education of Iran in the current year. The number of beds per 100,000 populations of each province and the Gini coefficients for each bed were calculated.

The findings of this study showed that, according to the Gini coefficients, non-cardiac intensive care beds have an almost equal geographical distribution throughout the country. However, the numbers of beds per population are less than other countries. Since such studies can be used as a base for health systems planning about correction of inequality of health services distribution, similar studies in other health care services are recommended which can be conducted at the national or provincial level.

Psychosocial and material pathways in the relation between income and health: a response to Lynch et al.

This is an open-access article distributed under the terms of the Creative Commons Attribution NonCommercial 3.0 License (CC BY-NC 3.0), which allows users to read, copy, distribute and make derivative works for non-commercial purposes from the material, as long as the author of the original work is cited properly.