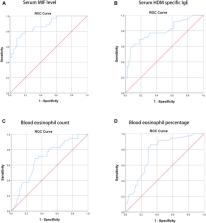 Background: Macrophage migration inhibitory factor (MIF) is described as a pro-inflammatory cytokine involved in many inflammatory and allergic disorders, but the role of MIF in allergic rhinitis (AR) remains poorly clarified. The aim of this study was to investigate the association between circulating MIF levels and house dust mite (HDM)-induced AR, and evaluate MIF as a potential biomarker in reflecting disease severity and predicting the clinical response of sublingual immunotherapy (SLIT) in HDM-induced AR patients.

Methods: In this study, we enrolled 160 persistent HDM-induced AR patients (AR group), including 48 mild AR patients (MAR group) and 112 moderate–severe AR patients (MSAR group), and 77 healthy controls (HC group). Circulating levels of MIF were measured by ELISA, and the relationship between MIF concentrations and disease severity was assessed. In the MSAR group, 106 patients were assigned to receive SLIT for 3 years. At the end of the study, patients were categorized into good response group and poor response group, and associations between clinical variables or biomarkers and clinical response were analyzed by the multivariate regression analysis.

Conclusion: Serum MIF appeared to be an important biological indicator in reflecting disease severity and an independent predictor for clinical responsiveness of SLIT in HDM-induced AR patients.

Allergic Rhinitis and its Impact on Asthma (ARIA) guidelines-2016 revision.

Arnav Agarwal,  Claus Bachert,  Sinthia Z Bosnic-Anticevich … (2017)
Allergic rhinitis (AR) affects 10% to 40% of the population. It reduces quality of life and school and work performance and is a frequent reason for office visits in general practice. Medical costs are large, but avoidable costs associated with lost work productivity are even larger than those incurred by asthma. New evidence has accumulated since the last revision of the Allergic Rhinitis and its Impact on Asthma (ARIA) guidelines in 2010, prompting its update.

Recommendations for standardization of clinical trials with Allergen Specific Immunotherapy for respiratory allergy. A statement of a World Allergy Organization (WAO) taskforce.

H-J Malling,  E. Valovirta,  G W Canonica … (2007)
Specific Immunotherapy for respiratory allergy is used since about one century and there is now solid documentation of its efficacy. Nevertheless, the methods and experimental designs used in clinical trials are quite heterogeneous and there is no unanimously accepted methodological standard. Many studies are planned with study designs that may not confirm the clinical value of SIT as an effective treatment to reduce disease severity. To ensure that patients are treated based on sound scientific evidence and to minimize the risk of misusing limited financial resources for scientific studies, the World Allergy Organization (WAO) convened a group of experts to provide guidelines for the methodology of future immunotherapy studies. This document summarizes the recommendations for study design, patients' selection, appropriate outcomes and statistical treatment to be used in planning and performing clinical trials with specific immunotherapy.

Recommendations for the standardization of clinical outcomes used in allergen immunotherapy trials for allergic rhinoconjunctivitis: an EAACI Position Paper.

O Pfaar,  P Demoly,  R. Gerth van Wijk … (2014)
Allergen immunotherapy (AIT) has been thoroughly documented in randomized controlled trials (RCTs). It is the only immune-modifying and causal treatment available for patients suffering from IgE-mediated diseases such as allergic rhinoconjunctivitis, allergic asthma and insect sting allergy. However, there is a high degree of clinical and methodological heterogeneity among the endpoints in clinical studies on AIT, for both subcutaneous and sublingual immunotherapy (SCIT and SLIT). At present, there are no commonly accepted standards for defining the optimal outcome parameters to be used for both primary and secondary endpoints.

This article was submitted to Respiratory Pharmacology, a section of the journal Frontiers in Pharmacology