Targeted Neonatal Echocardiography-Guided Therapy in Vein of Galen Aneurysmal Malformation: A Report of Two Cases with a Review of Physiology and Approach to Management 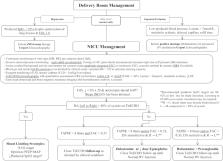 Vein of Galen malformation results in predictable changes in physiology which exist on a continuum. Severe pulmonary hypertension may present as hypoxemia; however, excessive reduction in pulmonary vascular resistance may precipitate progressive pulmonary overcirculation and impaired systemic blood flow. Right ventricular performance and the patency and direction of the ductus arteriosus may play a crucial role in postductal organ perfusion. Physiological stabilization may be complex and variable over time. The utilization of targeted neonatal echocardiography to guide treatment decisions may improve the ability to provide therapy tailored to the specific disease pathophysiology and monitor serially as conditions change. An enhanced approach to physiological stabilization may reduce the risk of unexpected decompensation and allow for thoughtful, controlled endovascular embolization in appropriate candidates.

The pharmacology of dobutamine.

Robert Ruffolo (1987)
Dobutamine is a sympathomimetic amine that was designed as an inotropic agent for use in congestive heart failure. Clinically, dobutamine increases cardiac output by selectively augmenting stroke volume, and this is associated with a decrease in total peripheral vascular resistance that is mediated, in part, by reflex withdrawal of sympathetic tone to the vasculature. This hemodynamic profile of dobutamine makes the drug of value in the management of low output cardiac failure. The inotropic activity of dobutamine has previously been attributed to selective stimulation of myocardial beta 1-adrenoceptors. However, recent studies from a number of laboratories indicate that the mechanism of action of dobutamine is substantially more complex. Dobutamine has the capacity to stimulate beta 1-, beta 2-, and alpha 1-adrenoceptors in the cardiovascular system at doses that approximate those used clinically. It has recently been suggested that the inotropic activity of dobutamine results from combined beta 1- and alpha 1-adrenoceptor stimulation in the myocardium, and that this activity could explain, at least in part, the inotropic selectivity of the compound. Furthermore, in the vasculature, the beta 2-adrenoceptor-mediated vasodilatory effect of dobutamine is exactly offset by the alpha 1-adrenoceptor-mediated vasoconstrictor activity, such that net changes in blood pressure are minimal following the administration of dobutamine. It is concluded, therefore, that the hemodynamic profile of dobutamine in patients with congestive heart failure is derived from a unique and complex series of interactions with alpha- and beta-adrenoceptors in the cardiovascular system.

B Tress,  P Frawley,  P Dargaville … (2002)
Neonatal presentation of vein of Galen aneurysmal malformations (VGAMs) with intractable cardiac failure is considered a poor prognostic sign. Interventional neuroradiology with embolisation has been shown to control cardiac failure, but there is a perception that neurological outcome in survivors is poor. To determine if aggressive intensive care and anaesthetic management of cardiac failure before urgent embolisation can influence morbidity and mortality. Nine newborns (four boys, five girls) were diagnosed with symptomatic vein of Galen malformations in the neonatal period during the period 1996-2001. Eight developed intractable high output cardiac failure requiring initial endovascular treatment in the first week of life. The immediate outcome after a series of endovascular procedures was control of cardiac failure and normal neurological function in six (66%) patients, one death from intractable cardiac failure in the neonatal period, and two late deaths with severe hypoxic-ischaemic neurological injury (33% mortality). Clinical review at 6 months to 4 years of age showed five infants with no evidence of neurological abnormality or cardiac failure and one child with mild developmental delay (11%). Aggressive medical treatment of cardiac failure and early neurointervention combined with modern neuroanaesthetic care results in good survival rates with low morbidity even in cases of high risk VGAM presenting in the immediate perinatal period with cardiac failure. Systemic arterial vasodilators improve outcome in neonates with cardiac failure secondary to VGAM. Excessive beta adrenergic stimulation induced by conventional inotropic agents may exacerbate systemic hypoperfusion.

A blind, randomized comparison of the circulatory effects of dopamine and epinephrine infusions in the newborn piglet during normoxia and hypoxia.