Suprasellar pilocytic astrocytoma in an adult with hemorrhage and leptomeningeal dissemination: case report and review of literature 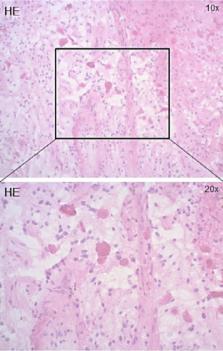 Pilocytic astrocytoma (PA) is a low-grade tumor. It has an excellent prognosis after total resection. Leptomeningeal dissemination and hemorrhage are very rare to be associated with PA and lead to unfavorable prognosis. A 35-year-old man was diagnosed with a hemorrhagic suprasellar PA in 2006. Subsequent examination in 2007 revealed another large subdural hemorrhagic lesion in the sacral region, which proved to be PA by histopathologic assessment. Other leptomeningeal foci were discovered mainly at the craniocervical junction. The patient underwent subtotal resection and received chemotherapy with disease control for 7 years. Progression of the disseminated disease has recently occurred; however, the patient is still alive with stable disease after radiotherapy. The radiological features, management, and relevant literature are also presented. Our report heightens the awareness of PA in the adult population and the importance of close surveillance for the leptomeningeal spread, especially for sellar region tumors.

V. Peter Collins,  David T. W. Jones,  Caterina Giannini (2015)
Pilocytic astrocytomas (PAs) were recognized as a discrete clinical entity over 70 years ago. They are relatively benign (WHO grade I) and have, as a group, a 10-year survival of over 90 %. Many require merely surgical removal and only very infrequently do they progress to more malignant gliomas. While most show classical morphology, they may present a spectrum of morphological patterns, and there are difficult cases that show similarities to other gliomas, some of which are malignant and require aggressive treatment. Until recently, almost nothing was known about the molecular mechanisms involved in their development. The use of high-throughput sequencing techniques interrogating the whole genome has shown that single abnormalities of the mitogen-activating protein kinase (MAPK) pathway are exclusively found in almost all cases, indicating that PA represents a one-pathway disease. The most common mechanism is a tandem duplication of a ≈2 Mb-fragment of #7q, giving rise to a fusion between two genes, resulting in a transforming fusion protein, consisting of the N-terminus of KIAA1549 and the kinase domain of BRAF. Additional infrequent fusion partners have been identified, along with other abnormalities of the MAP-K pathway, affecting tyrosine kinase growth factor receptors at the cell surface (e.g., FGFR1) as well as BRAF V600E, KRAS, and NF1 mutations among others. However, while the KIAA1549-BRAF fusion occurs in all areas, the incidence of the various other mutations identified differs in PAs that develop in different regions of the brain. Unfortunately, from a diagnostic standpoint, almost all mutations found have been reported in other brain tumor types, although some retain considerable utility. These molecular abnormalities will be reviewed, and the difficulties in their potential use in supporting a diagnosis of PA, when the histopathological findings are equivocal or in the choice of individualized therapy, will be discussed.

A population-based study of the incidence and survival rates in patients with pilocytic astrocytoma.

Luigi Di Lauro,  Hiroko Ohgaki,  M Yasargil … (2003)
The incidence of pilocytic astrocytomas and the rate of patient survival were analyzed in a population-based study in the canton of Zürich, Switzerland. Between 1980 and 1994, 987 astrocytic and oligodendroglial tumors were diagnosed, of which 55 (5.5%) were pilocytic astrocytomas. The incidence rate, adjusted to the World Standard Population, was 4.8 per 1 million per year. The mean age at clinical diagnosis was 19.6 +/- 12.7 years, and the male/female ratio was 1.12. The most frequent tumor sites were the cerebellum (40%), followed by supratentorial locations (35%), the optic pathway and hypothalamus (11%), and the brainstem (9%). The mean follow-up period was 12 years. Observed survival rates were 100% at 5 years and 95.8% at 10 years after diagnosis (relative survival rate at 10 years: 96.8%). Seven patients (13%) received postoperative radiotherapy, but this did not significantly affect survival. In all patients the tumors were histologically classified as WHO Grade I, except in two patients who had anaplastic pilocytic astrocytoma (Grade III), one of whom died after 7 years, whereas the other was still alive after 10 years. This population-based study shows that, because of the benign biological behavior of pilocytic astrocytomas and advances in microneurosurgery, the survival rates for patients with these tumors are excellent, regardless of postoperative radiotherapy.

Amanda Fisher,  Patricia T Goldthwaite,  James Kepner … (1999)
Among tumors classified as pilocytic astrocytoma (PA) in the Johns Hopkins Hospital Department of Pathology files, we identified 18 cases with a distinctive monomorphous pilomyxoid histological pattern and a higher recurrence rate than that of PA with classical histological features (classical PA). The majority of the tumors occurred in infants and young children and involved the hypothalamic/chiasmatic region. The tumors were histologically similar to PA, but they were more monomorphous and more myxoid. Rosenthal fibers were not seen and only 1 of 18 tumors had eosinophilic granular bodies. At the end of the follow-up period, 6 patients were dead and 12 were alive with evidence of disease. Progression free survival (PFS) at 1 year was 38.7%. In comparison, we identified a control group of 13 classical PAs in the same age range and location as the study group. In this group, PFS at 1 year was 69.2%, which was significantly better than that for pilomyxoid tumors (p = 0.04). There was no CSF dissemination or death due to tumor progression among patients with classical PA. Eight of these patients are alive with recurrent disease, and 4 have no evidence of disease. While the monomorphous pilomyxoid tumors have some resemblance to classical PA, our results suggest that the former is a more aggressive variant or a separate entity that needs to be recognized for prognostic purposes.