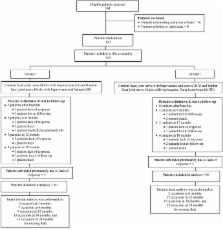 Objective: To determine the clinical effectiveness of therapeutic lumbar facet joint nerve blocks with or without steroids in managing chronic low back pain of facet joint origin.

Summary of Background Data: Lumbar facet joints have been shown as the source of chronic pain in 21% to 41% of low back patients with an average prevalence of 31% utilizing controlled comparative local anesthetic blocks. Intraarticular injections, medial branch blocks, and radiofrequency neurotomy of lumbar facet joint nerves have been described in the alleviation of chronic low back pain of facet joint origin.

Results: Significant improvement with significant pain relief of ≥ 50% and functional improvement of ≥ 40% were observed in 85% in Group 1, and 90% in Group II, at 2-year follow-up.

The patients in the study experienced significant pain relief for 82 to 84 weeks of 104 weeks, requiring approximately 5 to 6 treatments with an average relief of 19 weeks per episode of treatment.

Conclusions: Therapeutic lumbar facet joint nerve blocks, with or without steroids, may provide a management option for chronic function-limiting low back pain of facet joint origin.

The rising prevalence of chronic low back pain.

Scott Holmes,  Benjamin J Darter,  Amanda Castel … (2009)
National or state-level estimates on trends in the prevalence of chronic low back pain (LBP) are lacking. The objective of this study was to determine whether the prevalence of chronic LBP and the demographic, health-related, and health care-seeking characteristics of individuals with the condition have changed over the last 14 years. A cross-sectional, telephone survey of a representative sample of North Carolina households was conducted in 1992 and repeated in 2006. A total of 4437 households were contacted in 1992 and 5357 households in 2006 to identify noninstitutionalized adults 21 years or older with chronic (>3 months), impairing LBP or neck pain that limits daily activities. These individuals were interviewed in more detail about their health and health care seeking. The prevalence of chronic, impairing LBP rose significantly over the 14-year interval, from 3.9% (95% confidence interval [CI], 3.4%-4.4%) in 1992 to 10.2% (95% CI, 9.3%-11.0%) in 2006. Increases were seen for all adult age strata, in men and women, and in white and black races. Symptom severity and general health were similar for both years. The proportion of individuals who sought care from a health care provider in the past year increased from 73.1% (95% CI, 65.2%-79.8%) to 84.0% (95% CI, 80.8%-86.8%), while the mean number of visits to all health care providers were similar (19.5 [1992] vs 19.4 [2006]). The prevalence of chronic, impairing LBP has risen significantly in North Carolina, with continuing high levels of disability and health care use. A substantial portion of the rise in LBP care costs over the past 2 decades may be related to this rising prevalence.

A randomized trial of vertebroplasty for painful osteoporotic vertebral fractures.

Rachelle Buchbinder,  Richard Osborne,  Peter R Ebeling … (2009)
Vertebroplasty has become a common treatment for painful osteoporotic vertebral fractures, but there is limited evidence to support its use. We performed a multicenter, randomized, double-blind, placebo-controlled trial in which participants with one or two painful osteoporotic vertebral fractures that were of less than 12 months' duration and unhealed, as confirmed by magnetic resonance imaging, were randomly assigned to undergo vertebroplasty or a sham procedure. Participants were stratified according to treatment center, sex, and duration of symptoms ( or = 6 weeks). Outcomes were assessed at 1 week and at 1, 3, and 6 months. The primary outcome was overall pain (on a scale of 0 to 10, with 10 being the maximum imaginable pain) at 3 months. A total of 78 participants were enrolled, and 71 (35 of 38 in the vertebroplasty group and 36 of 40 in the placebo group) completed the 6-month follow-up (91%). Vertebroplasty did not result in a significant advantage in any measured outcome at any time point. There were significant reductions in overall pain in both study groups at each follow-up assessment. At 3 months, the mean (+/-SD) reductions in the score for pain in the vertebroplasty and control groups were 2.6+/-2.9 and 1.9+/-3.3, respectively (adjusted between-group difference, 0.6; 95% confidence interval, -0.7 to 1.8). Similar improvements were seen in both groups with respect to pain at night and at rest, physical functioning, quality of life, and perceived improvement. Seven incident vertebral fractures (three in the vertebroplasty group and four in the placebo group) occurred during the 6-month follow-up period. We found no beneficial effect of vertebroplasty as compared with a sham procedure in patients with painful osteoporotic vertebral fractures, at 1 week or at 1, 3, or 6 months after treatment. (Australian New Zealand Clinical Trials Registry number, ACTRN012605000079640.) 2009 Massachusetts Medical Society

A randomized trial of vertebroplasty for osteoporotic spinal fractures.

N. Turner,  Basavaraj Ghdoke,  Richard Edwards … (2009)
Vertebroplasty is commonly used to treat painful, osteoporotic vertebral compression fractures. In this multicenter trial, we randomly assigned 131 patients who had one to three painful osteoporotic vertebral compression fractures to undergo either vertebroplasty or a simulated procedure without cement (control group). The primary outcomes were scores on the modified Roland-Morris Disability Questionnaire (RDQ) (on a scale of 0 to 23, with higher scores indicating greater disability) and patients' ratings of average pain intensity during the preceding 24 hours at 1 month (on a scale of 0 to 10, with higher scores indicating more severe pain). Patients were allowed to cross over to the other study group after 1 month. All patients underwent the assigned intervention (68 vertebroplasties and 63 simulated procedures). The baseline characteristics were similar in the two groups. At 1 month, there was no significant difference between the vertebroplasty group and the control group in either the RDQ score (difference, 0.7; 95% confidence interval [CI], -1.3 to 2.8; P=0.49) or the pain rating (difference, 0.7; 95% CI, -0.3 to 1.7; P=0.19). Both groups had immediate improvement in disability and pain scores after the intervention. Although the two groups did not differ significantly on any secondary outcome measure at 1 month, there was a trend toward a higher rate of clinically meaningful improvement in pain (a 30% decrease from baseline) in the vertebroplasty group (64% vs. 48%, P=0.06). At 3 months, there was a higher crossover rate in the control group than in the vertebroplasty group (51% vs. 13%, P<0.001) [corrected]. There was one serious adverse event in each group. Improvements in pain and pain-related disability associated with osteoporotic compression fractures in patients treated with vertebroplasty were similar to the improvements in a control group. (ClinicalTrials.gov number, NCT00068822.) 2009 Massachusetts Medical Society

Conflicts of Interest: The authors have declared that no conflict of interest exists.

Publisher ID: ijmsv07p0124
PMC ID: 2880841
PubMed ID: 20567613
Copyright statement: © Ivyspring International Publisher. This is an open-access article distributed under the terms of the Creative Commons License (http://creativecommons.org/licenses/by-nc-nd/3.0/). Reproduction is permitted for personal, noncommercial use, provided that the article is in whole, unmodified, and properly cited.