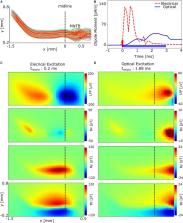 Magnetometry based on nitrogen-vacancy (NV) centers in diamond is a novel technique capable of measuring magnetic fields with high sensitivity and high spatial resolution. With the further advancements of these sensors, they may open up novel approaches for the 2D imaging of neural signals in vitro. In the present study, we investigate the feasibility of NV-based imaging by numerically simulating the magnetic signal from the auditory pathway of a rodent brainstem slice (ventral cochlear nucleus, VCN, to the medial trapezoid body, MNTB) as stimulated by both electric and optic stimulation. The resulting signal from these two stimulation methods are evaluated and compared. A realistic pathway model was created based on published data of the neural morphologies and channel dynamics of the globular bushy cells in the VCN and their axonal projections to the principal cells in the MNTB. The pathway dynamics in response to optic and electric stimulation and the emitted magnetic fields were estimated using the cable equation. For simulating the optic stimulation, the light distribution in brain tissue was numerically estimated and used to model the optogenetic neural excitation based on a four state channelrhodopsin-2 (ChR2) model. The corresponding heating was also estimated, using the bio-heat equation and was found to be low (<2°C) even at excessively strong optic signals. A peak magnetic field strength of ∼0.5 and ∼0.1 nT was calculated from the auditory brainstem pathway after electrical and optical stimulation, respectively. By increasing the stimulating light intensity four-fold (far exceeding commonly used intensities) the peak magnetic signal strength only increased to 0.2 nT. Thus, while optogenetic stimulation would be favorable to avoid artefacts in the recordings, electric stimulation achieves higher peak fields. The present simulation study predicts that high-resolution magnetic imaging of the action potentials traveling along the auditory brainstem pathway will only be possible for next generation NV sensors. However, the existing sensors already have sufficient sensitivity to support the magnetic sensing of cumulated neural signals sampled from larger parts of the pathway, which might be a promising intermediate step toward further maturing this novel technology.

Analysis of tissue and arterial blood temperatures in the resting human forearm.

Nitrogen-vacancy centers in diamond: nanoscale sensors for physics and biology.

Romana Schirhagl,  Kevin Chang,  Michael Loretz … (2014)
Crystal defects in diamond have emerged as unique objects for a variety of applications, both because they are very stable and because they have interesting optical properties. Embedded in nanocrystals, they can serve, for example, as robust single-photon sources or as fluorescent biomarkers of unlimited photostability and low cytotoxicity. The most fascinating aspect, however, is the ability of some crystal defects, most prominently the nitrogen-vacancy (NV) center, to locally detect and measure a number of physical quantities, such as magnetic and electric fields. This metrology capacity is based on the quantum mechanical interactions of the defect's spin state. In this review, we introduce the new and rapidly evolving field of nanoscale sensing based on single NV centers in diamond. We give a concise overview of the basic properties of diamond, from synthesis to electronic and magnetic properties of embedded NV centers. We describe in detail how single NV centers can be harnessed for nanoscale sensing, including the physical quantities that may be detected, expected sensitivities, and the most common measurement protocols. We conclude by highlighting a number of the diverse and exciting applications that may be enabled by these novel sensors, ranging from measurements of ion concentrations and membrane potentials to nanoscale thermometry and single-spin nuclear magnetic resonance.

Lisa A Gunaydin,  Ofer Yizhar,  Andre Berndt … (2010)
Channelrhodopsins such as channelrhodopsin-2 (ChR2) can drive spiking with millisecond precision in a wide variety of cells, tissues and animal species. However, several properties of this protein have limited the precision of optogenetic control. First, when ChR2 is expressed at high levels, extra spikes (for example, doublets) can occur in response to a single light pulse, with potential implications as doublets may be important for neural coding. Second, many cells cannot follow ChR2-driven spiking above the gamma (approximately 40 Hz) range in sustained trains, preventing temporally stationary optogenetic access to a broad and important neural signaling band. Finally, rapid optically driven spike trains can result in plateau potentials of 10 mV or more, causing incidental upstates with information-processing implications. We designed and validated an engineered opsin gene (ChETA) that addresses all of these limitations (profoundly reducing extra spikes, eliminating plateau potentials and allowing temporally stationary, sustained spike trains up to at least 200 Hz).

This article was submitted to Neural Technology, a section of the journal Frontiers in Neuroscience