The stem cell secretome and its role in brain repair 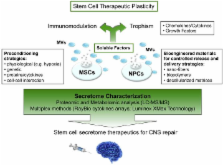 This paracrine hypothesis has inspired an alternative outlook on the use of stem cells in regenerative neurology. In this paradigm, significant repair of the injured brain may be achieved by injecting the biologics secreted by stem cells ( secretome), rather than implanting stem cells themselves for direct cell replacement. The stem cell secretome ( SCS) includes cytokines, chemokines and growth factors, and has gained increasing attention in recent years because of its multiple implications for the repair, restoration or regeneration of injured tissues.

Thanks to recent improvements in SCS profiling and manipulation, investigators are now inspired to harness the SCS as a novel alternative therapeutic option that might ensure more efficient outcomes than current stem cell-based therapies for CNS repair.

This review discusses the most recent identification of MSC- and NPC-secreted factors, including those that are trafficked within extracellular membrane vesicles (EVs), and reflects on their potential effects on brain repair. It also examines some of the most convincing advances in molecular profiling that have enabled mapping of the SCS.

J Ratajczak,  Mark Wieczorek,  M Wysoczynski … (2006)
Normal and malignant cells shed from their surface membranes as well as secrete from the endosomal membrane compartment circular membrane fragments called microvesicles (MV). MV that are released from viable cells are usually smaller in size compared to the apoptotic bodies derived from damaged cells and unlike them do not contain fragmented DNA. Growing experimental evidence indicates that MV are an underappreciated component of the cell environment and play an important pleiotropic role in many biological processes. Generally, MV are enriched in various bioactive molecules and may (i) directly stimulate cells as a kind of 'signaling complex', (ii) transfer membrane receptors, proteins, mRNA and organelles (e.g., mitochondria) between cells and finally (iii) deliver infectious agents into cells (e.g., human immuno deficiency virus, prions). In this review, we discuss the pleiotropic effects of MV that are important for communication between cells, as well as the role of MV in carcinogenesis, coagulation, immune responses and modulation of susceptibility/infectability of cells to retroviruses or prions.

P Conget,  J Minguell,  A Erices (2000)
Haemopoiesis is sustained by two main cellular components, the haematopoietic cells (HSCs) and the mesenchymal progenitor cells (MPCs). MPCs are multipotent and are the precursors for marrow stroma, bone, cartilage, muscle and connective tissues. Although the presence of HSCs in umbilical cord blood (UCB) is well known, that of MPCs has been not fully evaluated. In this study, we examined the ability of UCB harvests to generate in culture cells with characteristics of MPCs. Results showed that UCB-derived mononuclear cells, when set in culture, gave rise to adherent cells, which exhibited either an osteoclast- or a mesenchymal-like phenotype. Cells with the osteoclast phenotype were multinucleated, expressed TRAP activity and antigens CD45 and CD51/CD61. In turn, cells with the mesenchymal phenotype displayed a fibroblast-like morphology and expressed several MPC-related antigens (SH2, SH3, SH4, ASMA, MAB 1470, CD13, CD29 and CD49e). Our results suggest that preterm, as compared with term, cord blood is richer in mesenchymal progenitors, similar to haematopoietic progenitors.

Kent Claypool,  Darwin J Prockop,  Nikolay Bazhanov … (2010)
Previous reports suggested that culture as 3D aggregates or as spheroids can increase the therapeutic potential of the adult stem/progenitor cells referred to as mesenchymal stem cells or multipotent mesenchymal stromal cells (MSCs). Here we used a hanging drop protocol to prepare human MSCs (hMSCs) as spheroids that maximally expressed TNFalpha stimulated gene/protein 6 (TSG-6), the antiinflammatory protein that was expressed at high levels by hMSCs trapped in the lung after i.v. infusion and that largely explained the beneficial effects of hMSCs in mice with myocardial infarcts. The properties of spheroid hMSCs were found to depend critically on the culture conditions. Under optimal conditions for expression of TSG-6, the hMSCs also expressed high levels of stanniocalcin-1, a protein with both antiinflammatory and antiapoptotic properties. In addition, they expressed high levels of three anticancer proteins: IL-24, TNFalpha-related apoptosis inducing ligand, and CD82. The spheroid hMSCs were more effective than hMSCs from adherent monolayer cultures in suppressing inflammatory responses in a coculture system with LPS-activated macrophages and in a mouse model for peritonitis. In addition, the spheroid hMSCs were about one-fourth the volume of hMSCs from adherent cultures. Apparently as a result, larger numbers of the cells trafficked through the lung after i.v. infusion and were recovered in spleen, liver, kidney, and heart. The data suggest that spheroid hMSCs may be more effective than hMSCs from adherent cultures in therapies for diseases characterized by sterile tissue injury and unresolved inflammation and for some cancers that are sensitive to antiinflammatory agents.