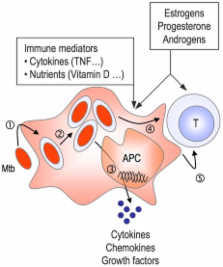 Olivier Neyrolles and Lluis Quintana-Murci review the evidence on why tuberulosis notification is twice as high in men as in women in most countries.

Natural resistance to infection with intracellular parasites: isolation of a candidate for Bcg.

Silvia Vidal,  Danielle Malo,  Kyle J Vogan … (1993)
Natural resistance to infection with intracellular parasites is controlled by a dominant gene on mouse chromosome 1, called Bcg, Lsh, or Ity. Bcg affects the capacity of macrophages to destroy ingested intracellular parasites early during infection. We have assembled a 400 kb bacteriophage and cosmid contig within the genomic interval containing Bcg. A search for transcription units by exon amplification identified six novel genes in this contig. RNA expression studies showed that one of them, designated Nramp, was expressed exclusively in macrophage populations from reticuloendothelial organs and in the macrophage line J774A. Nramp encodes an integral membrane protein that has structural homology with known prokaryotic and eukaryotic transport systems, suggesting a macrophage-specific membrane transport function. Susceptibility to infection (Bcgs) in 13 Bcgr and Bcgs strains tested is associated with a nonconservative Gly-105 to Asp-105 substitution within predicted transmembrane domain 2 of Nramp.

Research in Translation discusses health interventions in the context of translation from basic to clinical research, or from clinical evidence to practice.

Publisher ID: 09-PLME-RIT-2611R2
DOI: 10.1371/journal.pmed.1000199
PMC ID: 2788129
PubMed ID: 20027210
Copyright statement: Neyrolles, Quintana-Murci. This is an open-access article distributed under the terms of the Creative Commons Attribution License, which permits unrestricted use, distribution, and reproduction in any medium, provided the original author and source are credited.