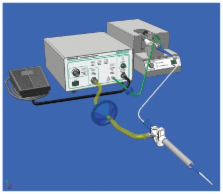 Obesity is a worldwide problem and has grown in severity in the last few decades making bariatric surgery and, in particular, laparoscopic banding and Roux-en-Y gastric bypass efficacious and cost-effective procedures. The laparoscopic approach has been shown to offer significant healthcare benefits, of particular interests are reports of decreased postoperative pain resulting in a shorter hospital stay and an earlier return to normal activity. However, many patients still experience significant pain, including shoulder tip pain, that require strong analgesia including opiates during their early recovery period. The aims of this study were to establish the safe use of the aerosolization technique in bariatric surgery and to investigate the possible benefits in reducing postoperative pain.

In this study, fifty patients undergoing laparoscopic gastric bypass were recruited and divided into two groups; control (n = 25) and therapeutic (n = 25). The control group received intraperitoneal aerosolization of 10 mL of 0.9% normal saline while the therapeutic group received 10 mL of 0.5% bupivacaine. All the patients had standard preoperative, intraoperative, and postoperative care. Pain scores were carried out by the nursing staff in recovery and 6 h, 12 h and 24 h postoperatively using a standard 0–10 pain scoring scale. In addition, opiate consumption via patient-controlled analgesia (PCA) was recorded.

The aims of this study were achieved and we were able to establish the safe use of the aerosolization technique in bariatric surgery and its benefits in reducing postoperative pain.

I Finlay,  Julio C. Hawkins,  Richard Welbourn … (2007)
Bariatric surgery is a clinically effective treatment for obesity and has been shown to be cost-effective. The impact of bariatric surgery on the subsequent ability to work and the uptake of state-funded benefits is not well documented. A consecutive series of 79 patients who had undergone laparoscopic Roux-en-Y gastric bypass (LRYGBP) or laparoscopic adjustable gastric banding (LAGB) were surveyed to assess changes in their ability to work and the number and type of state benefits claimed after surgery. 59 patients (75%) responded, median age 45, median follow-up 14 months. There was a 32% increase in the number of respondents in paid work after surgery (P<0.05). The mean weekly hours worked increased from 30.1 to 35.8 hours (P<0.01). Respondents also reported a decrease in obesity-related physical and emotional constraints on their ability to do work (P<0.01). Fewer patients claimed state benefits postoperatively (P<0.01). More patients perform paid work after LRYGBP and LAGB than beforehand, and the number of weekly hours they work increases. After surgery, patients claim fewer state benefits.