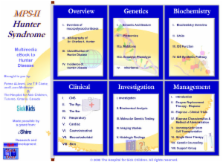 Computer-based teaching (CBT) is a well-known educational device, but it has never been applied systematically to the teaching of a complex, rare, genetic disease, such as Hunter disease (MPS II).

To develop interactive teaching software functioning as a virtual clinic for the management of MPS II.

The Hunter disease eClinic, a self-training, user-friendly educational software program, available at the Lysosomal Storage Research Group ( http://www.lysosomalstorageresearch.ca), was developed using the Adobe Flash multimedia platform. It was designed to function both to provide a realistic, interactive virtual clinic and instantaneous access to supporting literature on Hunter disease. The Hunter disease eClinic consists of an eBook and an eClinic. The eClinic is the interactive virtual clinic component of the software. Within an environment resembling a real clinic, the trainee is instructed to perform a medical history, to examine the patient, and to order appropriate investigation. The program provides clinical data derived from the management of actual patients with Hunter disease. The eBook provides instantaneous, electronic access to a vast collection of reference information to provide detailed background clinical and basic science, including relevant biochemistry, physiology, and genetics. In the eClinic, the trainee is presented with quizzes designed to provide immediate feedback on both trainee effectiveness and efficiency. User feedback on the merits of the program was collected at several seminars and formal clinical rounds at several medical centres, primarily in Canada. In addition, online usage statistics were documented for a 2-year period. Feedback was consistently positive and confirmed the practical benefit of the program. The online English-language version is accessed daily by users from all over the world; a Japanese translation of the program is also available.

The Hunter disease eClinic employs a CBT model providing the trainee with realistic clinical problems, coupled with comprehensive basic and clinical reference information by instantaneous access to an electronic textbook, the eBook. The program was rated highly by attendees at national and international presentations. It provides a potential model for use as an educational approach to other rare genetic diseases.

Mucopolysaccharidosis type II (Hunter syndrome): a clinical review and recommendations for treatment in the era of enzyme replacement therapy

J. Wraith,  Maurizio Scarpa,  Michael Beck … (2007)
Mucopolysaccharidosis type II (MPS II; Hunter syndrome) is a rare X-linked recessive disease caused by deficiency of the lysosomal enzyme iduronate-2-sulphatase, leading to progressive accumulation of glycosaminoglycans in nearly all cell types, tissues and organs. Clinical manifestations include severe airway obstruction, skeletal deformities, cardiomyopathy and, in most patients, neurological decline. Death usually occurs in the second decade of life, although some patients with less severe disease have survived into their fifth or sixth decade. Until recently, there has been no effective therapy for MPS II, and care has been palliative. Enzyme replacement therapy (ERT) with recombinant human iduronate-2-sulphatase (idursulfase), however, has now been introduced. Weekly intravenous infusions of idursulfase have been shown to improve many of the signs and symptoms and overall wellbeing in patients with MPS II. This paper provides an overview of the clinical manifestations, diagnosis and symptomatic management of patients with MPS II and provides recommendations for the use of ERT. The issue of treating very young patients and those with CNS involvement is also discussed. ERT with idursulfase has the potential to benefit many patients with MPS II, especially if started early in the course of the disease.

Christine LP Eng,  Michael Beck,  Paul Harmatz … (2008)
Mucopolysaccharidosis II, also known as Hunter syndrome, is a rare, X-linked disorder caused by a deficiency of the lysosomal enzyme iduronate-2-sulfatase, which catalyzes a step in the catabolism of glycosaminoglycans. In patients with mucopolysaccharidosis II, glycosaminoglycans accumulate within tissues and organs, contributing to the signs and symptoms of the disease. Mucopolysaccharidosis II affects multiple organs and physiologic systems and has a variable age of onset and variable rate of progression. Common presenting features include excess urinary glycosaminoglycan excretion, facial dysmorphism, organomegaly, joint stiffness and contractures, pulmonary dysfunction, myocardial enlargement and valvular dysfunction, and neurologic involvement. In patients with neurologic involvement, intelligence is impaired, and death usually occurs in the second decade of life, whereas those patients with minimal or no neurologic involvement may survive into adulthood with normal intellectual development. Enzyme replacement therapy has emerged as a new treatment for mucopolysaccharidosis disorders, including Hunter syndrome. The purpose of this report is to provide a concise review of mucopolysaccharidosis II for practitioners with the hope that such information will help identify affected boys earlier in the course of their disease.

Michael Beck (2007)
During the last few years, much progress has been made in the treatment of lysosomal storage disorders. In the past, no specific therapy was available for the affected patients, and management consisted solely of supportive care and treatment of complications. Since enzyme replacement therapy has been successfully introduced for patients with Gaucher disease, this principle of treatment has been taken into consideration for other lysosomal storage disorders as well. Clinical trials could demonstrate the clinical benefit of this therapeutic principle in Fabry disease, mucopolysaccharidoses type I, II and VI and in Pompe disease. However, the usefulness of enzyme replacement therapy is limited due to the fact that a given enzyme preparation does not have beneficial effects on all aspects of a disorder in the same degree. Additionally, clinical studies have shown that many symptoms of a lysosomal storage disorder even after long-term treatment are no more reversible. A further novel therapeutic option for lysosomal storage disorders consists of the application of small molecules that either inhibit a key enzyme which is responsible for substrate synthesis (substrate deprivation) or act as a chaperone to increase the residual activity of the lysosomal enzyme (enzyme enhancing therapy). Various gene therapeutic techniques (in vivo and ex vivo technique) have been developed in order to administer the gene that is defective in a patient to the bloodstream or directly to the brain in order to overcome the blood-brain barrier. This review will give an insight into these newly developed therapeutic strategies and will discuss their advantages and limitations.