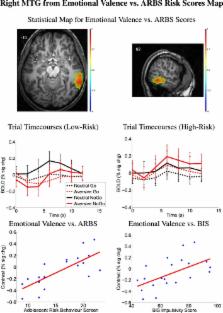 The role of the medial frontal cortex in cognitive control.

K. Ridderinkhof,  Sander Nieuwenhuis,  Eveline A. Crone … (2004)
Adaptive goal-directed behavior involves monitoring of ongoing actions and performance outcomes, and subsequent adjustments of behavior and learning. We evaluate new findings in cognitive neuroscience concerning cortical interactions that subserve the recruitment and implementation of such cognitive control. A review of primate and human studies, along with a meta-analysis of the human functional neuroimaging literature, suggest that the detection of unfavorable outcomes, response errors, response conflict, and decision uncertainty elicits largely overlapping clusters of activation foci in an extensive part of the posterior medial frontal cortex (pMFC). A direct link is delineated between activity in this area and subsequent adjustments in performance. Emerging evidence points to functional interactions between the pMFC and the lateral prefrontal cortex (LPFC), so that monitoring-related pMFC activity serves as a signal that engages regulatory processes in the LPFC to implement performance adjustments.

C. Carter,  V Andrew Stenger,  David Macdonald … (2004)
Conflict monitoring by the anterior cingulate cortex (ACC) has been posited to signal a need for greater cognitive control, producing neural and behavioral adjustments. However, the very occurrence of behavioral adjustments after conflict has been questioned, along with suggestions that there is no direct evidence of ACC conflict-related activity predicting subsequent neural or behavioral adjustments in control. Using the Stroop color-naming task and controlling for repetition effects, we demonstrate that ACC conflict-related activity predicts both greater prefrontal cortex activity and adjustments in behavior, supporting a role of ACC conflict monitoring in the engagement of cognitive control.

Age differences in sensation seeking and impulsivity as indexed by behavior and self-report: evidence for a dual systems model.

Laurence Steinberg,  Dustin Albert,  Elizabeth Cauffman … (2008)
It has been hypothesized that sensation seeking and impulsivity, which are often conflated, in fact develop along different timetables and have different neural underpinnings, and that the difference in their timetables helps account for heightened risk taking during adolescence. In order to test these propositions, the authors examined age differences in sensation seeking and impulsivity in a socioeconomically and ethnically diverse sample of 935 individuals between the ages of 10 and 30, using self-report and behavioral measures of each construct. Consistent with the authors' predictions, age differences in sensation seeking, which are linked to pubertal maturation, follow a curvilinear pattern, with sensation seeking increasing between 10 and 15 and declining or remaining stable thereafter. In contrast, age differences in impulsivity, which are unrelated to puberty, follow a linear pattern, with impulsivity declining steadily from age 10 on. Heightened vulnerability to risk taking in middle adolescence may be due to the combination of relatively higher inclinations to seek excitement and relatively immature capacities for self-control that are typical of this period of development.