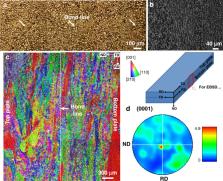 Fatigue is a difficult multi-scale modelling problem nucleating from localised plasticity at the scale of dislocations and microstructure with significant engineering safety implications. Cold dwell fatigue is a phenomenon in titanium where stress holds at moderate temperatures lead to substantial reductions in cyclic life, and has been implicated in service failures. Using discrete dislocation plasticity modelling complemented by transmission electron microscopy, we successfully predict lifetimes for ‘worst case’ microstructures representative of jet engine spin tests. Fatigue loading above a threshold stress is found to produce slip in soft grains, leading to strong dislocation pile-ups at boundaries with hard grains. Pile-up stresses generated are high enough to nucleate hard grain basal dislocations, as observed experimentally. Reduction of applied cyclic load alongside a temperature excursion during the cycle lead to much lower densities of prism dislocations in soft grains and, sometimes, the elimination of basal dislocations in hard grains altogether.

XLI. The equilibrium of linear arrays of dislocations.

Angus Wilkinson,  Graham Meaden,  David J Dingley (2006)
In this paper, we demonstrate that the shift between similar features in two electron backscatter diffraction (EBSD) patterns can be measured using cross-correlation based methods to +/- 0.05 pixels. For a scintillator screen positioned to capture the usual large solid angle employed in EBSD orientation mapping this shift corresponds to only approximately 8.5 x 10(-5)rad at the pattern centre. For wide-angled EBSD patterns, the variation in the entire strain and rotation tensor can be determined from single patterns. Repeated measurements of small rotations applied to a single-crystal sample, determined using the shifts at four widely separated parts of the EBSD patterns, showed a standard deviation of 1.3 x 10(-4) averaged over components of the displacement gradient tensor. Variations in strains and rotations were measured across the interface in a cross-sectioned Si1-x Gex epilayer on a Si substrate. Expansion of the epilayer close to the section surface is accommodated by tensile strains and lattice curvature that extend a considerable distance into the substrate. Smaller and more localised shear strains are observed close to the substrate-layer interface. EBSD provides an impressive and unique combination of high strain sensitivity, high spatial resolution and ease of use.