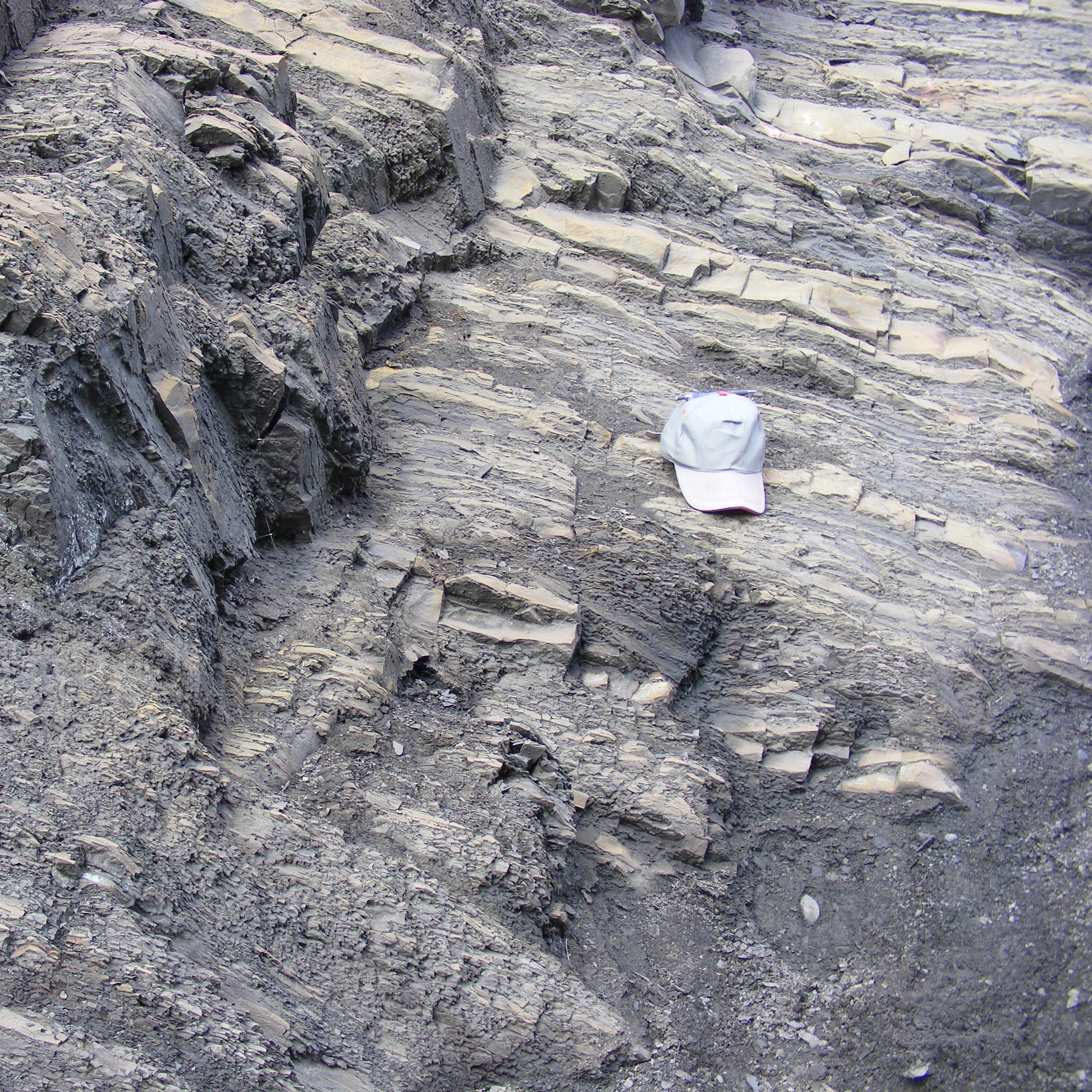 The objective of this project is to describe and analyze sedimentary rocks in the field, with the intention of recognizing and conceptualizing outcrop-based analog models for basin and field-scale subsurface fluid reservoirs. The area of study herein presented lies within 15km of the Grand Cache townsite in the Alberta Deep Basin, west-central Alberta. We show in this poster Early Cretaceous Fahler and Wilrich strata of the Spirit River Formation which we mapped during the field work. We performed field gamma ray measurements over a 325 meters (~1065 feet) thick outcrop succession of basal Fahler and Wilrich units and measured a 65 meters (~350 feet) section (Rain Bet) for detailed evaluation of the facies transition and contact between the basal (Lower) Fahler and Wilrich strata. From natural fracture measurements and structural mapping, we observed that natural fracture orientation is perpendicular to the fold axis of the northwest-southeast (NW-SE) trending folds observed. Natural fracture intensity varies between the Fahler and Wilrich units with taller fractures (centimeter to decimeter-scale) observed in the more competent sandstone layers and shorter fractures (millimeter to centimeter-scale) occurring with the interbedded sand-shale layers. Both open and calcite-filled fractures were observed and highlight the need for further evaluation of the role of natural fractures in enhancing or inhibiting fluid flow in the subsurface equivalents of the outcrop strata evaluated.

Beyond the near-wellbore information that can be accessed from core or wireline log analysis, outcrops present a larger-scale view of subsurface reservoir heterogeneities and broad insights into structural and stratigraphic controls that could affect field-scale fluid storage and transport in subsurface reservoirs. In the relatively under-sampled Wilrich and Fahler strata in west-central Alberta, outcrop studies and field mapping have been deployed by previous scholars as veritable techniques for characterizing the Wilrich and Fahler subsurface Members (Newitt, 2017 and Zonneveld, 2004; to mention but a few).

The objective of our fieldwork was to map the Early Cretaceous Wilrich to Lower/Basal Fahler units along a 325m road cut (Rain Bet Section) that lies between the Muskeg and Mason Thrusts ~11 kilometers outside the Grande Cache city limits as shown in the poster. We were interested in capturing and demonstrating the vertical facies transition from the Uppermost Gething and Bluesky strata which underlie the Wilrich to the overlying Lower/basal Fahler interval. Within the Wilrich and Fahler parasequences, our aim was to observe the relationships between natural fractures and sedimentary beds and consider the implications of these relationships on hydrocarbon exploration and exploitation in subsurface Wilrich and Fahler strata.

An RS 230 BGO handheld gamma ray Scintillometer was used to measure the natural radioactivity of the outcrop strata along the road cut. The tools spectrometer auto-stabilizes on the naturally occurring Potassium, Uranium, and Thorium radioactivity and does not require any test sources. Gamma ray readings were taken every 0.5 meters along the section resulting in 650 data points. A 1.5 metre long field pogo stick was used to measure a 65 meter section (shown as an orange rectangle on the Rain Bet profile in the poster) with detailed recognition of grain size variations (using a grain size card), sedimentary structures, lithology, bedding plane dip and strike (using a compass, Table 1), as well as the trend and plunge of paleoflows (trends were subsequently corrected). During the field trip, fold and natural fracture data were also measured and plotted on stereonets (see poster).

Table 1. Dip and strike measurements at bedding contacts in the outcrop

The Wilrich interval in the outcrop is an overall coarsening upwards succession that is comprised of sandstones, shales, and siltstones with hummocky cross-stratification, suggesting shoreface deposits that are located between the fair weather wave base and storm wave base. The Lower/basal Fahler unit also features sandstones, shales, and siltstone, along with coal beds. The Lower Fahler beds show planar and wavy lamination with occasional sideritic nodules towards the top of the section. The Fahler sand beds are progradational and thicker than sand beds in the Wilrich. The direction of paleoflows is predominantly north-northeast (NNE). Folding in the study area generally trends northwest-southeast (NW-SE) with natural fractures oriented perpendicular to the fold axis. Natural fractures in the Fahler sandstones are taller (centimeter to decimeter scale) than fractures in the Wilrich which tend to jog across centimeter scale bed boundaries in the Wilrich interval. Both open and calcite-filled fractures were observed in the Wilrich and Fahler intervals.

With typical core permeabilities in the Wilrich ranging from 0.01 to 0.1 millidarcies (mD), Newitt and Pedersen (2015), we opine that understanding the presence and characteristics of natural fractures in the Wilrich will be crucial in determining optimal hydraulic fracturing, completion strategies, and subsurface field development scenarios. Whereas open natural fractures may enhance the effective permeability, calcite-filled fractures may serve an opposite effect. Field development scenarios should also consider the implications of hydraulic fracture height growth out of the Wilrich interval into the overlying Fahler strata in order to mitigate against water influx into the underlying Wilrich reservoir. Acknowledgments

We would like to thank Dr. Stephen Hubbard and Bram Komaromi of the Center for Applied Basin Studies (CABS) at the University of Calgary for their guidance. In addition, we thank Dr. Per Kent Pedersen of CABS and the Tight Oil Consortium (TOC) for discussions that facilitated the poster preparation. Lastly, we are grateful to Shell for providing funding to support the fieldwork and Adobe for their software donation to the University of Calgary.

[1 ] Department of Geosciences, University of Calgary