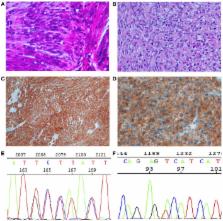 Gastrointestinal stromal tumors (GISTs) are the most frequent mesenchymal tumors of the gastrointestinal tract. The discovery that these tumors, formerly thought of smooth muscle origin, are indeed better characterized by specific activating mutation in genes coding for the receptor tyrosine kinases (RTKs) CKIT and PDGFRA and that these mutations are strongly predictive for the response to targeted therapy with RTK inhibitors has made GISTs the typical example of the integration of basic molecular knowledge in the daily clinical activity. The information on the mutational status of these tumors is essential to predict (and subsequently to plan) the therapy. As resistant cases are frequently wild type, other possible oncogenic events, defining other “entities,” have been discovered (e.g., succinil dehydrogenase mutation/dysregulation, insuline growth factor expression, and mutations in the RAS-RAF-MAPK pathway). The classification of disease must nowadays rely on the integration of the clinico-morphological characteristics with the molecular data.

M Takeda,  A Kurata,  Y Shinomura … (1998)
Gastrointestinal stromal tumors (GISTs) are the most common mesenchymal tumors in the human digestive tract, but their molecular etiology and cellular origin are unknown. Sequencing of c-kit complementary DNA, which encodes a proto-oncogenic receptor tyrosine kinase (KIT), from five GISTs revealed mutations in the region between the transmembrane and tyrosine kinase domains. All of the corresponding mutant KIT proteins were constitutively activated without the KIT ligand, stem cell factor (SCF). Stable transfection of the mutant c-kit complementary DNAs induced malignant transformation of Ba/F3 murine lymphoid cells, suggesting that the mutations contribute to tumor development. GISTs may originate from the interstitial cells of Cajal (ICCs) because the development of ICCs is dependent on the SCF-KIT interaction and because, like GISTs, these cells express both KIT and CD34.

Mary A. Selak,  M. Simon,  Amanda Mackenzie … (2004)
Several mitochondrial proteins are tumor suppressors. These include succinate dehydrogenase (SDH) and fumarate hydratase, both enzymes of the tricarboxylic acid (TCA) cycle. However, to date, the mechanisms by which defects in the TCA cycle contribute to tumor formation have not been elucidated. Here we describe a mitochondrion-to-cytosol signaling pathway that links mitochondrial dysfunction to oncogenic events: succinate, which accumulates as a result of SDH inhibition, inhibits HIF-alpha prolyl hydroxylases in the cytosol, leading to stabilization and activation of HIF-1alpha. These results suggest a mechanistic link between SDH mutations and HIF-1alpha induction, providing an explanation for the highly vascular tumors that develop in the absence of VHL mutations.

This article was submitted to Pathology, a section of the journal Frontiers in Medicine.