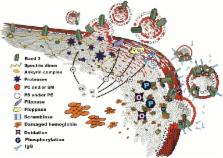 Red blood cells (RBCs) generate microvesicles to remove damaged cell constituents such as oxidized hemoglobin and damaged membrane constituents, and thereby prolong their lifespan. Damage to hemoglobin, in combination with altered phosphorylation of membrane proteins such as band 3, lead to a weakening of the binding between the lipid bilayer and the cytoskeleton, and thereby to membrane budding and microparticle shedding. Microvesicle generation is disturbed in patients with RBC-centered diseases, such as sickle cell disease, glucose 6-phosphate dehydrogenase deficiency, spherocytosis or malaria. A disturbance of the membrane-cytoskeleton interaction is likely to be the main underlying mechanism, as is supported by data obtained from RBCs stored in blood bank conditions. A detailed proteomic, lipidomic and immunogenic comparison of microvesicles derived from different sources is essential in the identification of the processes that trigger vesicle generation. The contribution of RBC-derived microvesicles to inflammation, thrombosis and autoimmune reactions emphasizes the need for a better understanding of the mechanisms and consequences of microvesicle generation.

Malaria-infected erythrocyte-derived microvesicles mediate cellular communication within the parasite population and with the host immune system.

René J Berckmans,  Augueste Sturk,  Erik Hack … (2001)
We determined the numbers, cellular origin and thrombin-generating properties of microparticles in healthy individuals (n = 15). Microparticles, isolated from fresh blood samples and identified by flow cytometry, originated from platelets [237 x 10(6)/L (median; range 116-565)], erythrocytes (28 x 10(6)/L; 13-46), granulocytes (46 x 10(6)/L; 16-94) and endothelial cells (64 x 10(6)/L; 16-136). They bound annexin V, indicating surface exposure of phosphatidylserine, and supported coagulation in vitro. Interestingly, coagulation occurred via tissue factor (TF)-independent pathways, because antibodies against TF or factor (F)VII were ineffective. In contrast, in our in vitro experiments coagulation was partially inhibited by antibodies against FXII (12%, p = 0.006), FXI (36%, p <0.001), FIX (28%, p <0.001) or FVIII (32%, p <0.001). Both the number of annexin V-positive microparticles present in plasma and the thrombin-generating capacity inversely correlated to the plasma concentrations of thrombin-antithrombin complex (r = -0.49, p = 0.072 and r = -0.77, p = 0.001, respectively), but did not correlate to prothrombin fragment F1+2 (r = -0.002, p = 0.99). The inverse correlations between the number of microparticles and their thrombin-forming capacity and the levels of thrombin-antithrombin complex in plasma may indicate that microparticles present in the circulation of healthy individuals have an anticoagulant function by promoting the generation of low amounts of thrombin that activate protein C. We conclude that microparticles in blood from healthy individuals support thrombin generation via TF- and FVII-independent pathways, and which may have an anticoagulant function.

Bregt Roerdinkholder-Stoelwinder,  Andries J Werre,  Ben De Pauw … (2008)
Previous studies demonstrated that 20% of haemoglobin is lost from circulating erythrocytes during their total lifespan by vesiculation. To study whether removal molecules other than membrane-bound haemoglobin were present in erythrocyte-derived vesicles, flow cytometry and immunoblot analysis were employed to examine the presence of phosphatidylserine (PS) and IgG, and senescent cell antigens respectively. It was demonstrated that 67% of glycophorin A-positive vesicles exposed PS, and that half of these vesicles also contained IgG. Immunoblot analysis revealed the presence of a breakdown product of band 3 that reacted with antibodies directed against senescent erythrocyte antigen-associated band 3 sequences. In contrast, only the oldest erythrocytes contained senescent cell antigens and IgG, and only 0.1% of erythrocytes, of all ages, exposed PS. It was concluded that vesiculation constitutes a mechanism for the removal of erythrocyte membrane patches containing removal molecules, thereby postponing the untimely elimination of otherwise healthy erythrocytes. Consequently, these same removal molecules mediate the rapid removal of erythrocyte-derived vesicles from the circulation.

This article was submitted to Membrane Physiology and Membrane Biophysics, a section of the journal Frontiers in Physiology