Toll like receptor signaling in “inflammaging”: microRNA as new players 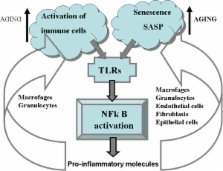 The age-related changes of immune system functions are complex phenomena incompletely understood. The acquired immune system shows a functional decline in ability to respond to new pathogens during aging, whereas serum levels of inflammatory cytokines are increased with age. The source of this age-related systemic chronic inflammation, named inflammaging, was mainly attributed to the progressive activation of immune cells over time. However, recent studies have shown that the process of cellular senescence can be an important additional contributor to chronic inflammation, since senescent cells acquire a phenotype named “senescence-associated secretory phenotype” (SASP), characterized by the enhanced secretion of many inflammation modulators. Pathogen-associated molecular pattern receptors, in particular Toll-like receptors (TLRs), are key molecules in the response of innate immunity cells to pathological stimuli. An intriguing and innovative hypothesis is that the dysfunction of TLRs signaling and the acquisition of SASP can be two interconnected phenomena. The TLR family, including receptors and co-effector molecules, do not show a consistent age-dependent change across model systems. However, there is evidence for impaired downstream signaling events, including inhibition of positive and activation of negative modulators of TLR signaling. MicroRNAs (miRNAs) are a newly discovered class of gene regulators acting as post-transcriptional repressors of a number of genes. The miRNA property to finely-tune gene expression makes them right for immune system regulation, which requires precise control for proper activity. We reviewed evidences suggesting that miRNAs can modulate TLR signaling mainly by three different mechanisms: 1) miRNAs can directly target components of the TLR signaling system, 2) miRNA expression can be directly regulated by TLRs pathway activation and 3) miRNAs can directly activate the RNA-sensing TLRs, like TLR-8, in humans. We also reviewed how TLR signaling is modulated by miRNAs during aging, and how an impaired miRNAs/TLR signaling interaction in immune system cells and related cells, i.e. endothelial cells and adipocytes, can contribute to inflammaging observed in normal aging. Interestingly, this impairment appears accelerated in presence of the majors age-related diseases, such as cardiovascular diseases, diabetes, neurodegenerative diseases and cancers.

Konstantin Taganov,  David Baltimore,  Perng-Kuang Chang … (2006)
Activation of mammalian innate and acquired immune responses must be tightly regulated by elaborate mechanisms to control their onset and termination. MicroRNAs have been implicated as negative regulators controlling diverse biological processes at the level of posttranscriptional repression. Expression profiling of 200 microRNAs in human monocytes revealed that several of them (miR-146a/b, miR-132, and miR-155) are endotoxin-responsive genes. Analysis of miR-146a and miR-146b gene expression unveiled a pattern of induction in response to a variety of microbial components and proinflammatory cytokines. By means of promoter analysis, miR-146a was found to be a NF-kappaB-dependent gene. Importantly, miR-146a/b were predicted to base-pair with sequences in the 3' UTRs of the TNF receptor-associated factor 6 and IL-1 receptor-associated kinase 1 genes, and we found that these UTRs inhibit expression of a linked reporter gene. These genes encode two key adapter molecules downstream of Toll-like and cytokine receptors. Thus, we propose a role for miR-146 in control of Toll-like receptor and cytokine signaling through a negative feedback regulation loop involving down-regulation of IL-1 receptor-associated kinase 1 and TNF receptor-associated factor 6 protein levels.

Inflammaging and anti-inflammaging: a systemic perspective on aging and longevity emerged from studies in humans.

Fabiola Olivieri,  Claudio Franceschi,  Elisa Cevenini … (2006)
A large part of the aging phenotype, including immunosenescence, is explained by an imbalance between inflammatory and anti-inflammatory networks, which results in the low grade chronic pro-inflammatory status we proposed to call inflammaging. Within this perspective, healthy aging and longevity are likely the result not only of a lower propensity to mount inflammatory responses but also of efficient anti-inflammatory networks, which in normal aging fail to fully neutralize the inflammatory processes consequent to the lifelong antigenic burden and exposure to damaging agents. Such a global imbalance can be a major driving force for frailty and common age-related pathologies, and should be addressed and studied within an evolutionary-based systems biology perspective. Evidence in favor of this conceptualization largely derives from studies in humans. We thus propose that inflammaging can be flanked by anti-inflammaging as major determinants not only of immunosenescence but eventually of global aging and longevity.

Inflamm-aging. An evolutionary perspective on immunosenescence.

Ruben C. Franceschi,  M Palma,  G. Koster … (2000)
In this paper we extend the "network theory of aging," and we argue that a global reduction in the capacity to cope with a variety of stressors and a concomitant progressive increase in proinflammatory status are major characteristics of the aging process. This phenomenon, which we will refer to as "inflamm-aging," is provoked by a continuous antigenic load and stress. On the basis of evolutionary studies, we also argue that the immune and the stress responses are equivalent and that antigens are nothing other than particular types of stressors. We also propose to return macrophage to its rightful place as central actor not only in the inflammatory response and immunity, but also in the stress response. The rate of reaching the threshold of proinflammatory status over which diseases/disabilities ensue and the individual capacity to cope with and adapt to stressors are assumed to be complex traits with a genetic component. Finally, we argue that the persistence of inflammatory stimuli over time represents the biologic background (first hit) favoring the susceptibility to age-related diseases/disabilities. A second hit (absence of robust gene variants and/or presence of frail gene variants) is likely necessary to develop overt organ-specific age-related diseases having an inflammatory pathogenesis, such as atherosclerosis, Alzheimer's disease, osteoporosis, and diabetes. Following this perspective, several paradoxes of healthy centenarians (increase of plasma levels of inflammatory cytokines, acute phase proteins, and coagulation factors) are illustrated and explained. In conclusion, the beneficial effects of inflammation devoted to the neutralization of dangerous/harmful agents early in life and in adulthood become detrimental late in life in a period largely not foreseen by evolution, according to the antagonistic pleiotropy theory of aging.