Role of calcitonin gene-related peptide in cerebral vasospasm, and as a therapeutic approach to subarachnoid hemorrhage 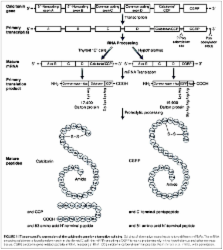 Calcitonin gene-related peptide (CGRP) is one of the most potent microvascular vasodilators identified to date. Vascular relaxation and vasodilation is mediated via activation of the CGRP receptor. This atypical receptor is made up of a G protein-coupled receptor called calcitonin receptor-like receptor (CLR), a single transmembrane protein called receptor activity-modifying protein (RAMP), and an additional protein that is required for Ga s coupling, known as receptor component protein (RCP). Several mechanisms involved in CGRP-mediated relaxation have been identified. These include nitric oxide (NO)-dependent endothelium-dependent mechanisms or cAMP-mediated endothelium-independent pathways; the latter being more common. Subarachnoid hemorrhage (SAH) is associated with cerebral vasoconstriction that occurs several days after the hemorrhage and is often fatal. The vasospasm occurs in 30–40% of patients and is the major cause of death from this condition. The vasoconstriction is associated with a decrease in CGRP levels in nerves and an increase in CGRP levels in draining blood, suggesting that CGRP is released from nerves to oppose the vasoconstriction. This evidence has led to the concept that exogenous CGRP may be beneficial in a condition that has proven hard to treat. The present article reviews: (a) the pathophysiology of delayed ischemic neurologic deficit after SAH (b) the basics of the CGRP receptor structure, signal transduction, and vasodilatation mechanisms and (c) the studies that have been conducted so far using CGRP in both animals and humans with SAH.

Susan Amara, Vivian Jonas, Michael G. Rosenfeld … (1982)
Alternative processing of RNA transcripts from the calcitonin gene results in the production of distinct mRNAs encoding the hormone calcitonin or a predicted product referred to as calcitonin gene-related peptide (CGRP). The calcitonin mRNA predominates in the thyroid while the CGRP-specific mRNA appears to predominate in the hypothalamus. These observations lead us to propose a model in which developmental regulation of RNA processing is used to increase the diversity of neuroendocrine gene expression.

R. Loch Macdonald, Neal F. Kassell, Stephan Mayer … (2008)
This randomized, double-blind, placebo-controlled, dose-finding study assessed efficacy and safety of 1, 5, and 15 mg/h intravenous clazosentan, an endothelin receptor antagonist, in preventing vasospasm after aneurysmal subarachnoid hemorrhage. Patients (n=413) were randomized to placebo or clazosentan beginning within 56 hours and continued up to 14 days after initiation of treatment. The primary end point was moderate or severe angiographic vasospasm based on centrally read, blinded evaluation of digital subtraction angiography at baseline and 7 to 11 days postsubarachnoid hemorrhage. A morbidity/mortality end point, including all-cause mortality, new cerebral infarct from any cause, delayed ischemic neurological deficit due to vasospasm, or use of rescue therapy, was evaluated by local assessment. Clinical outcome was assessed by the extended Glasgow Outcome Scale at 12 weeks. Moderate or severe vasospasm was reduced in a dose-dependent fashion from 66% in the placebo group to 23% in the 15 mg/h clazosentan group (risk reduction, 65%; 95% CI, 47% to 78%; P<0.0001). No significant effects were seen on secondary end points. Post hoc analysis using a centrally assessed morbidity/mortality end point that included death and rescue therapy but only cerebral infarcts and delayed ischemic neurological deficit due to vasospasm on central review showed a trend toward improvement with clazosentan (37%, 28%, and 29% in the 1, 5, and 15 mg/h groups versus 39% in the placebo group, nonsignificant). Clazosentan was associated with increased rates of pulmonary complications, hypotension, and anemia. Clazosentan significantly decreased moderate and severe vasospasm in a dose-dependent manner and showed a trend for reduction in vasospasm-related morbidity/mortality in patients with aneurysmal subarachnoid hemorrhage when centrally assessed. Overall, the adverse effects were manageable and not considered serious.

This article was submitted to Frontiers in Neuroendocrine Science, a specialty of Frontiers in Endocrinology.