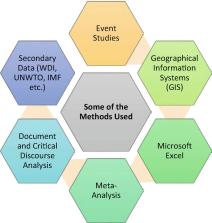 Journal: Counting the Cost of COVID-19 on the Global Tourism Industry

This chapter provides the context in which the book “Counting the Cost of COVID-19 on Global Tourism Industry” is written, including highlights for what follows in the rest of the book. The COVID-19 pandemic came when the world was in the midst of entertaining major global development agendas that had implications on the global tourism value chains. Among such major global development agendas, one could list the 2030 Agenda for Sustainable Development and its aligned 17 Sustainable Development Goals (SDGs), the Paris Agreement, the Sendai Framework and Habitat III’s New Urban Agenda. The pandemic also steered geopolitical and global economic tensions as key players, including individuals and countries, demanded answers as to what led to such a wild and unstoppable spread of the coronavirus. Accusations of maladministration within the World Health Organization (WHO) and connivance with China emerged. Many countries battled to “flatten” the runaway COVID-19 and economic curves. Many countries and territories went on lockdown, with millions infected and hundreds of thousands dead by the time this book was going into production. Global economic stimulus packages were urgently instituted, and the tourism sector was among the top beneficiaries of such packages. The chapter also presents sections on the importance of the tourism sector to the global economy and how past pandemics affected the sector. It further highlights the overall methodological framework used for data generation and analysis.

Transmission routes of 2019-nCoV and controls in dental practice

Xian Peng,  Xin Xu,  Yuqing Li … (2020)
A novel β-coronavirus (2019-nCoV) caused severe and even fetal pneumonia explored in a seafood market of Wuhan city, Hubei province, China, and rapidly spread to other provinces of China and other countries. The 2019-nCoV was different from SARS-CoV, but shared the same host receptor the human angiotensin-converting enzyme 2 (ACE2). The natural host of 2019-nCoV may be the bat Rhinolophus affinis as 2019-nCoV showed 96.2% of whole-genome identity to BatCoV RaTG13. The person-to-person transmission routes of 2019-nCoV included direct transmission, such as cough, sneeze, droplet inhalation transmission, and contact transmission, such as the contact with oral, nasal, and eye mucous membranes. 2019-nCoV can also be transmitted through the saliva, and the fetal–oral routes may also be a potential person-to-person transmission route. The participants in dental practice expose to tremendous risk of 2019-nCoV infection due to the face-to-face communication and the exposure to saliva, blood, and other body fluids, and the handling of sharp instruments. Dental professionals play great roles in preventing the transmission of 2019-nCoV. Here we recommend the infection control measures during dental practice to block the person-to-person transmission routes in dental clinics and hospitals.

Sheng-Qun Deng,  Hong-Juan Peng (2020)
In December 2019, cases of unidentified pneumonia with a history of exposure in the Huanan Seafood Market were reported in Wuhan, Hubei Province. A novel coronavirus, SARS-CoV-2, was identified to be accountable for this disease. Human-to-human transmission is confirmed, and this disease (named COVID-19 by World Health Organization (WHO)) spread rapidly around the country and the world. As of 18 February 2020, the number of confirmed cases had reached 75,199 with 2009 fatalities. The COVID-19 resulted in a much lower case-fatality rate (about 2.67%) among the confirmed cases, compared with Severe Acute Respiratory Syndrome (SARS) and Middle East Respiratory Syndrome (MERS). Among the symptom composition of the 45 fatality cases collected from the released official reports, the top four are fever, cough, short of breath, and chest tightness/pain. The major comorbidities of the fatality cases include hypertension, diabetes, coronary heart disease, cerebral infarction, and chronic bronchitis. The source of the virus and the pathogenesis of this disease are still unconfirmed. No specific therapeutic drug has been found. The Chinese Government has initiated a level-1 public health response to prevent the spread of the disease. Meanwhile, it is also crucial to speed up the development of vaccines and drugs for treatment, which will enable us to defeat COVID-19 as soon as possible.

Moira Chan-Yeung,  Rui-Heng Xu (2003)
Severe acute respiratory syndrome (SARS) originated in Southern China in November 2002, and was brought to Hong Kong in February 2003. From Hong Kong, the disease spread rapidly worldwide but mostly to Asian countries. At the end of the epidemic in June, the global cumulative total was 8422 cases with 916 deaths (case fatality rate of 11%). People of all ages were affected, but predominantly females. Health care workers were at high risk and accounted for one‐fifth of all cases. Risk factors for death included old age and comorbid illnesses, especially diabetes. The disease is caused by a novel coronavirus and is transmitted by droplets or direct inoculation from contact with infected surfaces. Contaminated sewage was found to be responsible for the outbreak in a housing estate in Hong Kong affecting over 300 residents. The mean incubation period was 6.4 days (range 2–10). The duration between onset of symptoms and hospitalisation was from 3 to 5 days. The relatively prolonged incubation period allowed asymptomatic air travellers to spread the disease globally. The number of individuals infected by each case has been estimated to be 2.7. Effective control of nosocomial transmission included early detection of disease, strict isolation of patients, practice of droplet and contact precautions and compliance with the use of personal protective equipment. Effective control of disease spread in the community included tracing and quarantine of contacts. Development of a validated diagnostic test and an effective vaccine as well as elimination of possible animal reservoirs are measures needed to prevent another epidemic.