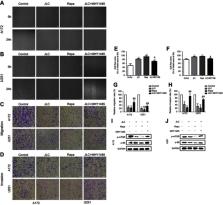 Aim: To investigate the anticancer effects of Jinlong capsule (JLC) against human glioblastoma cells and the possible underlying mechanism.

Methods: Cell Counting Kit-8 and colony formation assay were adopted for the analysis of cell viability. Cell invasion and migration were evaluated by transwell and wound healing assays. Then, the expression level of mammalian target of rapamycin (mTOR), phosphorylated mTOR (p-mTOR), S6 and phosphorylated S6 (p-S6) were determined by western blotting.

Results: The results showed that JLC significantly inhibited human glioblastoma cell proliferation, invasion and migration in a dose-dependent manner. The expressions of p-mTOR and p-S6 were dramatically suppressed by JLC. Furtherly, inhibition of mTOR reduced the cell migration and invasion, while the mTOR agonist (MHY1485) could partially reverse the anti-migration and anti-invasion activity of JLC.

Conclusion: The above results suggested that JLC would be a potential candidate for the treatment of glioblastoma.

Involvement of PI3K/PTEN/AKT/mTOR pathway in invasion and metastasis in hepatocellular carcinoma: Association with MMP-9.

Long Zhang,  Hao Tan,  Xin Fu … (2009)
To investigate the status of Phosphatidylinositol 3-kinase (PI3K)/PTEN/AKT/mammalian target of rapamycin (mTOR) pathway and its correlation with clinicopathological features and matrix metalloproteinase-2, -9 (MMP-2, 9) in human hepatocellular carcinoma (HCC). PTEN, Phosphorylated AKT (p-AKT), Phosphorylated mTOR (p-mTOR), MMP-2, MMP-9 and Ki-67 expression levels were evaluated by immunohistochemistry on tissue microarrays containing 200 HCCs with paired adjacent non-cancerous liver tissues. PTEN, MMP-2 and MMP-9 mRNA levels were determined by real-time RT-PCR in 36 HCCs. The relationships between PI3K/PTEN/AKT/mTOR pathway and clinicopathological factors and MMP-2, 9 were analyzed in HCC. In HCC, PTEN loss and overexpression of p-AKT and p-mTOR were associated with tumor grade, intrahepatic metastasis, vascular invasion, TNM stage and high Ki-67 labeling index (P < 0.05). PTEN loss was correlated with p-AKT, p-mTOR and MMP-9 overexpression. Furthermore, PTEN and MMP-2, 9 mRNA levels were down-regulated and up-regulated in HCC compared with paired non-cancerous liver tissues, respectively (P < 0.01). PTEN, MMP-2 and MMP-9 mRNA levels were correlated with tumor stage and metastasis. There was an inverse correlation between PTEN and MMP-9 mRNA expression. However, PI3K/PTEN/AKT/mTOR pathway was not correlated with MMP-2. PI3K/PTEN/AKT/mTOR pathway, which is activated in HCC, is involved in invasion and metastasis through up-regulating MMP-9 in HCC.

Rosario Maugeri,  GABRIELLA SCHIERA,  Carlo Maria Di Liegro … (2016)
Brain primary tumors are among the most diverse and complex human cancers, and they are normally classified on the basis of the cell-type and/or the grade of malignancy (the most malignant being glioblastoma multiforme (GBM), grade IV). Glioma cells are able to migrate throughout the brain and to stimulate angiogenesis, by inducing brain capillary endothelial cell proliferation. This in turn causes loss of tight junctions and fragility of the blood–brain barrier, which becomes leaky. As a consequence, the most serious clinical complication of glioblastoma is the vasogenic brain edema. Both glioma cell migration and edema have been correlated with modification of the expression/localization of different isoforms of aquaporins (AQPs), a family of water channels, some of which are also involved in the transport of other small molecules, such as glycerol and urea. In this review, we discuss relationships among expression/localization of AQPs and brain tumors/edema, also focusing on the possible role of these molecules as both diagnostic biomarkers of cancer progression, and therapeutic targets. Finally, we will discuss the possibility that AQPs, together with other cancer promoting factors, can be exchanged among brain cells via extracellular vesicles (EVs).

Goparaju Chandrika,  Kumar Natesh,  Deepak Ranade … (2016)
Glioblastoma (GBM) is the most aggressive type of brain tumors in adults with survival period <1.5 years of patients. The role of mTOR pathway is documented in invasion and migration, the features associated with aggressive phenotype in human GBM. However, most of the preclinical and clinical studies with mTOR inhibitors are focused on antiproliferative and cytotoxic activity in GBM. In this study, we demonstrate that mTOR inhibitors-rapamycin (RAP), temisirolimus (TEM), torin-1 (TOR) and PP242 suppress invasion and migration induced by Tumor Necrosis Factor-α (TNFα) and tumor promoter, Phorbol 12-myristate 13-acetate (PMA) and also reduce the expression of the TNFα and IL1β suggesting their potential to regulate factors in microenvironment that support tumor progression. The mTOR inhibitors significantly decreased MMP-2 and MMP-9 mRNA, protein and activity that was enhanced by TNFα and PMA. The effect was mediated through reduction of Protein kinase C alpha (PKC-α) activity and downregulation of NFκB. TNFα- induced transcripts of NFκB targets -VEGF, pentraxin-3, cathepsin-B and paxillin, crucial in invasion were restored to basal level by these inhibitors. With limited therapeutic interventions currently available for GBM, our findings are significant and suggest that mTOR inhibitors may be explored as anti-invasive drugs for GBM treatment.