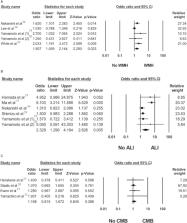 Abnormal circadian blood pressure ( BP) variations during sleep, specifically the non‐dipping (<10% fall in nocturnal BP) and reverse‐dipping patterns (rise in nocturnal BP), have been associated with an increased risk of cardiovascular events and target organ damage. However, the relationship between abnormal sleep BP variations and cerebral small vessel disease markers is poorly established. This study aims to assess the association between non‐dipping and reverse‐dipping BP patterns with markers of silent cerebral small vessel disease.

MEDLINE, Embase, and Cochrane Databases were searched from inception through November 2019. Studies that reported the odds ratios (ORs) for cerebral small vessel disease markers in patients with non‐dipping or reverse‐dipping BP patterns were included. Effect estimates from the individual studies were extracted and combined using the random‐effect, generic inverse variance method of DerSimonian and Laird. Twelve observational studies composed of 3497 patients were included in this analysis. The reverse‐dipping compared with normal dipping BP pattern was associated with a higher prevalence of white matter hyperintensity with a pooled adjusted OR of 2.00 (95% CI, 1.13–2.37; I 2=36%). Non‐dipping BP pattern compared with normal dipping BP pattern was associated with higher prevalence of white matter hyperintensity and asymptomatic lacunar infarction, with pooled ORs of 1.38 (95% CI, 0.95–2.02; I 2=52%) and 2.33 (95% CI, 1.30–4.18; I 2=73%), respectively. Limiting to only studies with confounder‐adjusted analysis resulted in a pooled OR of 1.38 (95% CI, 0.95–2.02; I 2=52%) for white matter hyperintensity and 1.44 (95% CI, 0.97–2.13; I 2=0%) for asymptomatic lacunar infarction.

Blood pressure and clinical outcomes in the International Stroke Trial.

Peter A G Sandercock,  Robert Phillips,   … (2002)
Among patients with acute stroke, high blood pressure is often associated with poor outcome, although the reason is unclear. We analyzed data from the International Stroke Trial (IST) to explore the relationship between systolic blood pressure (SBP), subsequent clinical events over the next 2 weeks, and functional outcome at 6 months in patients with acute stroke. We included in the analysis 17 398 patients from IST with confirmed ischemic stroke. A single measurement of SBP was made immediately before randomization. Clinical events within 14 days of randomization were recorded: recurrent ischemic stroke, symptomatic intracranial hemorrhage, death resulting from presumed cerebral edema, fatal coronary heart disease, and death. Survival and dependency were assessed at 6 months. Outcomes were adjusted for age, sex, clinical stroke syndrome, time to randomization, consciousness level, atrial fibrillation, and treatment allocation (aspirin, unfractionated heparin, both, or neither). A U-shaped relationship was found between baseline SBP and both early death and late death or dependency: early death increased by 17.9% for every 10 mm Hg below 150 mm Hg (P<0.0001) and by 3.8% for every 10 mm Hg above 150 mm Hg (P=0.016). The rate of recurrent ischemic stroke within 14 days increased by 4.2% for every 10-mm Hg increase in SBP (P=0.023); this association was present in both fatal and nonfatal recurrence. Death resulting from presumed cerebral edema was independently associated with high SBP (P=0.004). No relationship between symptomatic intracranial hemorrhage and SBP was seen. Low SBP was associated with a severe clinical stroke (total anterior circulation syndrome) and an excess of deaths from coronary heart disease (P=0.002). Both high blood pressure and low blood pressure were independent prognostic factors for poor outcome, relationships that appear to be mediated in part by increased rates of early recurrence and death resulting from presumed cerebral edema in patients with high blood pressure and increased coronary heart disease events in those with low blood pressure. The occurrence of symptomatic intracranial hemorrhage within 14 days was independent of SBP.