Immortalized pathological human myoblasts: towards a universal tool for the study of neuromuscular disorders 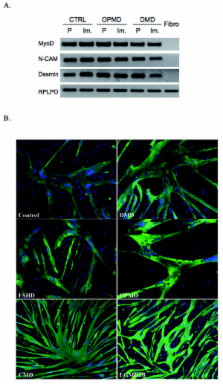 Investigations into both the pathophysiology and therapeutic targets in muscle dystrophies have been hampered by the limited proliferative capacity of human myoblasts. Isolation of reliable and stable immortalized cell lines from patient biopsies is a powerful tool for investigating pathological mechanisms, including those associated with muscle aging, and for developing innovative gene-based, cell-based or pharmacological biotherapies.

Using transduction with both telomerase-expressing and cyclin-dependent kinase 4-expressing vectors, we were able to generate a battery of immortalized human muscle stem-cell lines from patients with various neuromuscular disorders.

Dystrophic cellular models are required as a supplement to animal models to assess cellular mechanisms, such as signaling defects, or to perform high-throughput screening for therapeutic molecules. These investigations have been conducted for many years on cells derived from animals, and would greatly benefit from having human cell models with prolonged proliferative capacity. Furthermore, the possibility to assess in vivo the regenerative capacity of these cells extends their potential use. The innovative cellular tools derived from several different neuromuscular diseases as described in this report will allow investigation of the pathophysiology of these disorders and assessment of new therapeutic strategies.

Extension of life-span by introduction of telomerase into normal human cells.

Joanna C. Chiu,  Gregg Morin,  A Bodnár … (1998)
Normal human cells undergo a finite number of cell divisions and ultimately enter a nondividing state called replicative senescence. It has been proposed that telomere shortening is the molecular clock that triggers senescence. To test this hypothesis, two telomerase-negative normal human cell types, retinal pigment epithelial cells and foreskin fibroblasts, were transfected with vectors encoding the human telomerase catalytic subunit. In contrast to telomerase-negative control clones, which exhibited telomere shortening and senescence, telomerase-expressing clones had elongated telomeres, divided vigorously, and showed reduced straining for beta-galactosidase, a biomarker for senescence. Notably, the telomerase-expressing clones have a normal karyotype and have already exceeded their normal life-span by at least 20 doublings, thus establishing a causal relationship between telomere shortening and in vitro cellular senescence. The ability to maintain normal human cells in a phenotypically youthful state could have important applications in research and medicine.

R. Cawthon (2002)
It has long been presumed impossible to measure telomeres in vertebrate DNA by PCR amplification with oligonucleotide primers designed to hybridize to the TTAGGG and CCCTAA repeats, because only primer dimer-derived products are expected. Here we present a primer pair that eliminates this problem, allowing simple and rapid measurement of telomeres in a closed tube, fluorescence-based assay. This assay will facilitate investigations of the biology of telomeres and the roles they play in the molecular pathophysiology of diseases and aging.

O Nohira,  D Rochefort,  Y. Xie … (1998)
Autosomal dominant oculopharyngeal muscular dystrophy (OPMD) is an adult-onset disease with a world-wide distribution. It usually presents in the sixth decade with progressive swallowing difficulties (dysphagia), eyelid drooping (ptosis) and proximal limb weakness. Unique nuclear filament inclusions in skeletal muscle fibres are its pathological hallmark. We isolated the poly(A) binding protein 2 gene (PABP2) from a 217-kb candidate interval on chromosome 14q11 (B.B. et al., manuscript submitted). A (GCG)6 repeat encoding a polyalanine tract located at the N terminus of the protein was expanded to (GCG)8-13 in the 144 OPMD families screened. More severe phenotypes were observed in compound heterozygotes for the (GCG)9 mutation and a (GCG)7 allele that is found in 2% of the population, whereas homozygosity for the (GCG)7 allele leads to autosomal recessive OPMD. Thus the (GCG)7 allele is an example of a polymorphism which can act either as a modifier of a dominant phenotype or as a recessive mutation. Pathological expansions of the polyalanine tract may cause mutated PABP2 oligomers to accumulate as filament inclusions in nuclei.