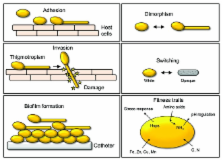 The polymorphic fungus Candida albicans is a member of the normal human microbiome. In most individuals, C. albicans resides as a lifelong, harmless commensal. Under certain circumstances, however, C. albicans can cause infections that range from superficial infections of the skin to life-threatening systemic infections. Several factors and activities have been identified which contribute to the pathogenic potential of this fungus. Among them are molecules which mediate adhesion to and invasion into host cells, the secretion of hydrolases, the yeast-to-hypha transition, contact sensing and thigmotropism, biofilm formation, phenotypic switching and a range of fitness attributes. Our understanding of when and how these mechanisms and factors contribute to infection has significantly increased during the last years. In addition, novel virulence mechanisms have recently been discovered. In this review we present an update on our current understanding of the pathogenicity mechanisms of this important human pathogen.

How Many Species Are There on Earth and in the Ocean?

The heat shock response: life on the verge of death.

Klaus Richter, Martin Haslbeck, Johannes Buchner (2010)
Organisms must survive a variety of stressful conditions, including sudden temperature increases that damage important cellular structures and interfere with essential functions. In response to heat stress, cells activate an ancient signaling pathway leading to the transient expression of heat shock or heat stress proteins (Hsps). Hsps exhibit sophisticated protection mechanisms, and the most conserved Hsps are molecular chaperones that prevent the formation of nonspecific protein aggregates and assist proteins in the acquisition of their native structures. In this Review, we summarize the concepts of the protective Hsp network. Copyright © 2010 Elsevier Inc. All rights reserved.