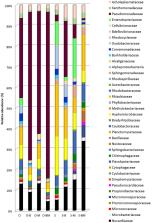 This study aimed at characterising the endophytic bacterial communities living in durum wheat roots, as affected by wheat cultivar and inoculation of the Arbuscular mycorrhizal fungus Funneliformis mosseae IMA1 and the wheat root endophytic bacterium Lactobacillus plantarum B.MD.R.A2. These microorganisms were inoculated, alone or in combination, in durum wheat (cultivars Odisseo and Saragolla). Non-inoculated plants of each cultivar represented the controls. Forty-three days after sowing, roots were deprived of the epiphytic microbiota and subjected to DNA extraction. The DNA was used as template in PCR-DGGE analysis of the 16S rRNA gene (variable region V3–V5) and 16S (region V1–V3) metagenetics. Odisseo and Saragolla root endophytic bacterial biotas differed for number of OTUs and composition. In detail, Pseudomonas was higher in Odisseo than in Saragolla. The inoculation of F. mosseae and L. plantarum increased the abundance of Pseudomonas, some Actinobacteria (e.g., Streptomyces, Microbacterium, two genera including several plant growth promoting (PGP) strains) and Bacteroidetes in both cultivars. However, the endophytic bacterial biota of Saragolla roots inoculated just with lactobacilli did not differ from that of the control. The inoculation of Saragolla with F. mosseae, alone or in combination with lactobacilli, led to higher abundance of Rhodococcus, belonging to Actinobacteria and encompassing PGP strains. First, this work showed that F. mosseae and L. plantarum shape the endophytic bacterial biota of durum wheat roots. Abundance of some OTUs was affected by the microbial inoculation, depending on the cultivar. This result represents a starting point for exploitation of beneficial endophytes of wheat roots.

Properties of bacterial endophytes and their proposed role in plant growth.

Jan Dirk van Elsas,  Frederieke van der Deen,  Cristiane Hardoim (2008)
Bacterial endophytes live inside plants for at least part of their life cycle. Studies of the interaction of endophytes with their host plants and their function within their hosts are important to address the ecological relevance of endophytes. The modulation of ethylene levels in plants by bacterially produced 1-aminocyclopropane-1-carboxylate deaminase is a key trait that enables interference with the physiology of the host plant. Endophytes with this capacity might profit from association with the plant, because colonization is enhanced. In turn, host plants benefit by stress reduction and increased root growth. This mechanism leads to the concept of 'competent' endophytes, defined as endophytes that are equipped with genes important for maintenance of plant-endophyte associations. The ecological role of these endophytes and their relevance for plant growth are discussed here.

Agroecology: the key role of arbuscular mycorrhizas in ecosystem services.

Armelle Gollotte,  Silvio Gianinazzi,  Daniel Wipf … (2010)
The beneficial effects of arbuscular mycorrhizal (AM) fungi on plant performance and soil health are essential for the sustainable management of agricultural ecosystems. Nevertheless, since the 'first green revolution', less attention has been given to beneficial soil microorganisms in general and to AM fungi in particular. Human society benefits from a multitude of resources and processes from natural and managed ecosystems, to which AM make a crucial contribution. These resources and processes, which are called ecosystem services, include products like food and processes like nutrient transfer. Many people have been under the illusion that these ecosystem services are free, invulnerable and infinitely available; taken for granted as public benefits, they lack a formal market and are traditionally absent from society's balance sheet. In 1997, a team of researchers from the USA, Argentina and the Netherlands put an average price tag of US $33 trillion a year on these fundamental ecosystem services. The present review highlights the key role that the AM symbiosis can play as an ecosystem service provider to guarantee plant productivity and quality in emerging systems of sustainable agriculture. The appropriate management of ecosystem services rendered by AM will impact on natural resource conservation and utilisation with an obvious net gain for human society.

Timothy Steiner,  Jan Suchodolski,  Scot Dowd … (2011)
This study evaluated the fecal microbiota of 12 healthy pet dogs and 12 pet cats using bacterial and fungal tag-encoded FLX-Titanium amplicon pyrosequencing. A total of 120,406 pyrosequencing reads for bacteria (mean 5017) and 5359 sequences (one pool each for dogs and cats) for fungi were analyzed. Additionally, group-specific 16S rRNA gene clone libraries for Bifidobacterium spp. and lactic acid-producing bacteria (LAB) were constructed. The most abundant bacterial phylum was Firmicutes, followed by Bacteroidetes in dogs and Actinobacteria in cats. The most prevalent bacterial class in dogs and cats was Clostridia, dominated by the genera Clostridium (clusters XIVa and XI) and Ruminococcus. At the genus level, 85 operational taxonomic units (OTUs) were identified in dogs and 113 OTUs in cats. Seventeen LAB and eight Bifidobacterium spp. were detected in canine feces. Ascomycota was the only fungal phylum detected in cats, while Ascomycota, Basidiomycota, Glomeromycota, and Zygomycota were identified in dogs. Nacaseomyces was the most abundant fungal genus in dogs; Saccharomyces and Aspergillus were predominant in cats. At the genus level, 33 different fungal OTUs were observed in dogs and 17 OTUs in cats. In conclusion, this study revealed a highly diverse bacterial and fungal microbiota in canine and feline feces. © 2011 Federation of European Microbiological Societies. Published by Blackwell Publishing Ltd. All rights reserved.

This article was submitted to Plant Microbe Interactions, a section of the journal Frontiers in Microbiology