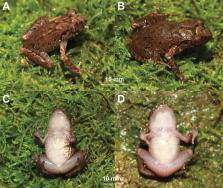 A new species of the Asian leaf litter toad genus Leptobrachella from Guizhou Province, China is described based on molecular phylogenetic analyses, morphological comparisons, and bioacoustics data. Phylogenetic analyses based on the mitochondrial 16S rRNA gene sequences supported the new species as an independent clade nested into the Leptobrachella clade and sister to L. bijie . The new species could be distinguished from its congeners by a combination of the following characters: small body size (SVL 30.8–33.4 mm in seven adult males, and 34.2 mm in one adult female); dorsal skin shagreened, some of the granules forming longitudinal short skin ridges; tympanum distinctly discernible, slightly concave; internasal distance longer than interorbital distance; supra-axillary, femoral, pectoral and ventrolateral glands distinctly visible; absence of webbing and lateral fringes on fingers; toes with rudimentary webbing and shallow lateral fringes, relative finger lengths II < IV < I < III; heels overlapped when thighs are positioned at right angles to the body; and tibia-tarsal articulation reaches the tympanum.

The Amphibian Fauna of Thailand

Chatmongkon Suwannapoom,  Amy Lathrop,  Yun-He Wu … (2018)
Southeast Asia and southern China (SEA-SC) harbor a highly diverse and endemic flora and fauna that is under increasing threat. An understanding of the biogeographical history and drivers of this diversity is lacking, especially in some of the most diverse and threatened groups. The Asian leaf-litter frog genus Leptolalax Dubois 1980 is a forest-dependent genus distributed throughout SEA-SC, making it an ideal study group to examine specific biogeographic hypotheses. In addition, the diversity of this genus remains poorly understood, and the phylogenetic relationships among species of Leptolalax and closely related Leptobrachella Smith 1928 remain unclear. Herein, we evaluate species-level diversity based on 48 of the 53 described species from throughout the distribution of Leptolalax. Molecular analyses reveal many undescribed species, mostly in southern China and Indochina. Our well-resolved phylogeny based on multiple nuclear DNA markers shows that Leptolalax is not monophyletic with respect to Leptobrachella and, thus, we assign the former to being a junior synonym of the latter. Similarly, analyses reject monophyly of the two subgenera of Leptolalax. The diversification pattern of the group is complex, involving a high degree of sympatry and prevalence of microendemic species. Northern Sundaland (Borneo) and eastern Indochina (Vietnam) appear to have played pivotal roles as geographical centers of diversification, and paleoclimatic changes and tectonic movements seem to have driven the major divergence of clades. Analyses fail to reject an "upstream" colonization hypothesis, and, thus, the genus appears to have originated in Sundaland and then colonized mainland Asia. Our results reveal that both vicariance and dispersal are responsible for current distribution patterns in the genus.