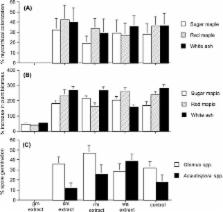 C D'Antonio,  Christopher D. Richardson,  M Rejmánek … (2000)
Many introduced plant species rely on mutualisms in their new habitats to overcome barriers to establishment and to become naturalized and, in some cases, invasive. Mutualisms involving animal-mediated pollination and seed dispersal, and symbioses between plant roots and microbiota often facilitate invasions. The spread of many alien plants, particularly woody ones, depends on pollinator mutualisms. Most alien plants are well served by generalist pollinators (insects and birds), and pollinator limitation does not appear to be a major barrier for the spread of introduced plants (special conditions relating to Ficus and orchids are described). Seeds of many of the most notorious plant invaders are dispersed by animals, mainly birds and mammals. Our review supports the view that tightly coevolved, plant-vertebrate seed dispersal systems are extremely rare. Vertebrate-dispersed plants are generally not limited reproductively by the lack of dispersers. Most mycorrhizal plants form associations with arbuscular mycorrhizal fungi which, because of their low specificity, do not seem to play a major role in facilitating or hindering plant invasions (except possibly on remote islands such as the Galapagos which are poor in arbuscular mycorrhizal fungi). The lack of symbionts has, however, been a major barrier for many ectomycorrhizal plants, notably for Pinus spp. in parts of the southern hemisphere. The roles of nitrogen-fixing associations between legumes and rhizobia and between actinorhizal plants and Frankia spp. in promoting or hindering invasions have been virtually ignored in the invasions literature. Symbionts required to induce nitrogen fixation in many plants are extremely widespread, but intentional introductions of symbionts have altered the invasibility of many, if not most, systems. Some of the world's worst invasive alien species only invaded after the introduction of symbionts. Mutualisms in the new environment sometimes re-unite the same species that form partnerships in the native range of the plant. Very often, however, different species are involved, emphasizing the diffuse nature of many (most) mutualisms. Mutualisms in new habitats usually duplicate functions or strategies that exist in the natural range of the plant. Occasionally, mutualisms forge totally novel combinations, with profound implications for the behaviour of the introduced plant in the new environment (examples are seed dispersal mutualisms involving wind-dispersed pines and cockatoos in Australia; and mycorrhizal associations involving plant roots and fungi). Many ecosystems are becoming more susceptible to invasion by introduced plants because: (a) they contain an increasing array of potential mutualistic partners (e.g. generalist frugivores and pollinators, mycorrhizal fungi with wide host ranges, rhizobia strains with infectivity across genera); and (b) conditions conductive for the establishment of various alien/alien synergisms are becoming more abundant. Incorporating perspectives on mutualisms in screening protocols will improve (but not perfect) our ability to predict whether a given plant species could invade a particular habitat.

DOI: 10.1371/journal.pbio.0040140
PMC ID: 1440938
PubMed ID: 16623597
Copyright statement: Copyright: © 2006 Stinson et al. This is an open-access article distributed under the terms of the Creative Commons Attribution License, which permits unrestricted use, distribution, and reproduction in any medium, provided the original author and source are credited.