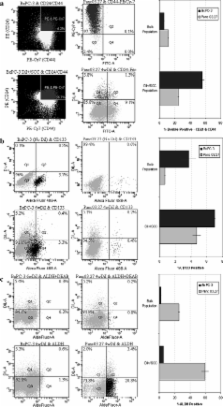 Evidence suggests that multiple tumors, including pancreatic adenocarcinoma, display heterogeneity in parameters that are critical for tumor formation, progression and metastasis. Understanding heterogeneity in solid tumors is increasingly providing a plethora of new diagnostic and therapeutic approaches. In this study, a particular focus was put on identifying a subpopulation of stem cell-like, slow cycling tumor cells in a pancreas adenocarcinoma cell lines. Using a label retention technique a subpopulation of slow cycling cells (DiI+/SCC) was identified and further evaluated in the BxPC-3 and Panc03.27 cell lines. These slowly cycling cells managed to retain the lipophilic labeling dye DiI, while the bulk of the cells (>94%) did not. The DiI+/SCC population, showed only a partial overlap with the CSC markers CD24 +/CD44 +, CD133 + and ALDH but they survived chemotherapeutic treatment, and were able to recreate the initial heterogeneous tumor cell population. DiI+/SCCs exhibited an increased invasive potential as compared with their non-label retaining, faster cycling cells (DiI−/FCC). They also had increased tumorigenic potential and morphological changes resembling cells that have undergone an epithelial to mesenchymal transition (EMT). Analysis of DiI+/SCC cells by real time PCR revealed a selective up-regulation of tell tale components of the Hedgehog/TGFβ pathways, as well as a down-regulation of EGFR, combined with a shift in crucial components implied in EMT. The presented findings offer an expanded mechanistic understanding that associates tumor initiating potential with cycling speed and EMT in pancreatic cancer cell lines.

Virginie Clement-Schatlo,  Ivan Radovanovic,  Nicolas de Tribolet … (2007)
Cancer stem cells are rare tumor cells characterized by their ability to self-renew and to induce tumorigenesis. They are present in gliomas and may be responsible for the lethality of these incurable brain tumors. In the most aggressive and invasive type, glioblastoma multiforme (GBM), an average of about one year spans the period between detection and death [1]. The resistence of gliomas to current therapies may be related to the existence of cancer stem cells [2-6]. We find that human gliomas display a stemness signature and demonstrate that HEDGEHOG (HH)-GLI signaling regulates the expression of stemness genes in and the self-renewal of CD133(+) glioma cancer stem cells. HH-GLI signaling is also required for sustained glioma growth and survival. It displays additive and synergistic effects with temozolomide (TMZ), the current chemotherapeutic agent of choice. TMZ, however, does not block glioma stem cell self-renewal. Finally, interference of HH-GLI signaling with cyclopamine or through lentiviral-mediated silencing demonstrates that the tumorigenicity of human gliomas in mice requires an active pathway. Our results reveal the essential role of HH-GLI signaling in controlling the behavior of human glioma cancer stem cells and offer new therapeutic possibilities.

Induction of sonic hedgehog mediators by transforming growth factor-beta: Smad3-dependent activation of Gli2 and Gli1 expression in vitro and in vivo.