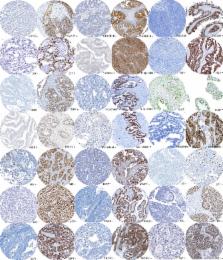 Although it has long been appreciated that ovarian carcinoma subtypes (serous, clear cell, endometrioid, and mucinous) are associated with different natural histories, most ovarian carcinoma biomarker studies and current treatment protocols for women with this disease are not subtype specific. With the emergence of high-throughput molecular techniques, distinct pathogenetic pathways have been identified in these subtypes. We examined variation in biomarker expression rates between subtypes, and how this influences correlations between biomarker expression and stage at diagnosis or prognosis.

In this retrospective study we assessed the protein expression of 21 candidate tissue-based biomarkers (CA125, CRABP-II, EpCam, ER, F-Spondin, HE4, IGF2, K-Cadherin, Ki-67, KISS1, Matriptase, Mesothelin, MIF, MMP7, p21, p53, PAX8, PR, SLPI, TROP2, WT1) in a population-based cohort of 500 ovarian carcinomas that was collected over the period from 1984 to 2000. The expression of 20 of the 21 biomarkers differs significantly between subtypes, but does not vary across stage within each subtype. Survival analyses show that nine of the 21 biomarkers are prognostic indicators in the entire cohort but when analyzed by subtype only three remain prognostic indicators in the high-grade serous and none in the clear cell subtype. For example, tumor proliferation, as assessed by Ki-67 staining, varies markedly between different subtypes and is an unfavourable prognostic marker in the entire cohort (risk ratio [RR] 1.7, 95% confidence interval [CI] 1.2%–2.4%) but is not of prognostic significance within any subtype. Prognostic associations can even show an inverse correlation within the entire cohort, when compared to a specific subtype. For example, WT1 is more frequently expressed in high-grade serous carcinomas, an aggressive subtype, and is an unfavourable prognostic marker within the entire cohort of ovarian carcinomas (RR 1.7, 95% CI 1.2%–2.3%), but is a favourable prognostic marker within the high-grade serous subtype (RR 0.5, 95% CI 0.3%–0.8%).

The association of biomarker expression with survival varies substantially between subtypes, and can easily be overlooked in whole cohort analyses. To avoid this effect, each subtype within a cohort should be analyzed discretely. Ovarian carcinoma subtypes are different diseases, and these differences should be reflected in clinical research study design and ultimately in the management of ovarian carcinoma.

David Huntsman and colleagues describe the associations between biomarker expression patterns and survival in different ovarian cancer subtypes. They suggest that the management of ovarian cancer should reflect differences between these subtypes.

Every year, about 200,000 women develop ovarian cancer and more than 100,000 die from the disease. Ovarian epithelial cancer (carcinoma) occurs when epithelial cells from the ovary or fallopian tube acquire mutations or equivalent changes that allow them to grow uncontrollably within one of the ovaries (two small organs in the pelvis that produce eggs) and acquire the potential to spread around the body (metastasize). While the cancer is confined to the ovaries, cancer specialists call this stage I disease; 70%–80% of women diagnosed with stage I ovarian cancer survive for at least 5 y. However, only a fifth of ovarian cancers are diagnosed at this stage; in the majority of patients the cancer has spread into the pelvis (stage II disease), into the peritoneal cavity (the space around the gut, stomach, and liver; stage III disease), or metastasized to distant organs such as brain (stage IV disease). This peritoneal spread might be associated with often only vague abdominal pain and mild digestive disturbances. Patients with advanced-stage ovarian carcinoma are treated with a combination of surgery and chemotherapy but, despite recent advances in treatment, only 15% of women diagnosed with stage IV disease survive for 5 y.

Although it is usually regarded as a single disease, there are actually several distinct subtypes of ovarian carcinoma. These are classified according to their microscopic appearance as high-grade serous, low-grade serous, clear cell, endometrioid, and mucinous ovarian carcinomas. These subtypes develop differently and respond differently to chemotherapy. Yet scientists studying ovarian carcinoma usually regard this cancer as a single entity, and current treatment protocols for the disease are not subtype specific. Might better progress be made toward understanding ovarian carcinoma and toward improving its treatment if each subtype were treated as a separate disease? Why are some tumors confined to the ovary, whereas the majority spread beyond the ovary at time of diagnosis? In this study, the researchers address these questions by asking whether correlations between the expression of “biomarkers” (molecules made by cancer cells that can be used to detect tumors and to monitor treatment effectiveness) and the stage at diagnosis or length of survival can be explained by differential biomarker expression between different subtypes of ovarian carcinoma. They also address the question of whether early stage and late stage ovarian carcinomas are fundamentally different.

Adrian Wiestner,  Andreas Rosenwald,  Robert H Hurt … (2003)
To classify cancer specimens by their gene expression profiles, we created a statistical method based on Bayes' rule that estimates the probability of membership in one of two cancer subgroups. We used this method to classify diffuse large B cell lymphoma (DLBCL) biopsy samples into two gene expression subgroups based on data obtained from spotted cDNA microarrays. The germinal center B cell-like (GCB) DLBCL subgroup expressed genes characteristic of normal germinal center B cells whereas the activated B cell-like (ABC) DLBCL subgroup expressed a subset of the genes that are characteristic of plasma cells, particularly those encoding endoplasmic reticulum and golgi proteins involved in secretion. We next used this predictor to discover these subgroups within a second set of DLBCL biopsies that had been profiled by using oligonucleotide microarrays [Shipp, M. A., et al. (2002) Nat. Med. 8, 68-74]. The GCB and ABC DLBCL subgroups identified in this data set had significantly different 5-yr survival rates after multiagent chemotherapy (62% vs. 26%; P < or = 0.0051), in accord with analyses of other DLBCL cohorts. These results demonstrate the ability of this gene expression-based predictor to classify DLBCLs into biologically and clinically distinct subgroups irrespective of the method used to measure gene expression.

Gordon Mills,  Ingegerd Hellström,  Rebecca T. Marquez … (2004)
Advanced-stage epithelial ovarian cancer has a poor prognosis with long-term survival in less than 30% of patients. When the disease is detected in stage I, more than 90% of patients can be cured by conventional therapy. Screening for early-stage disease with individual serum tumor markers, such as CA125, is limited by the fact that no single marker is up-regulated and shed in adequate amounts by all ovarian cancers. Consequently, use of multiple markers in combination might detect a larger fraction of early-stage ovarian cancers. To identify potential candidates for novel markers, we have used Affymetrix human genome arrays (U95 series) to analyze differences in gene expression of 41,441 known genes and expressed sequence tags between five pools of normal ovarian surface epithelial cells (OSE) and 42 epithelial ovarian cancers of different stages, grades, and histotypes. Recursive descent partition analysis (RDPA) was performed with 102 probe sets representing 86 genes that were up-regulated at least 3-fold in epithelial ovarian cancers when compared with normal OSE. In addition, a panel of 11 genes known to encode potential tumor markers [mucin 1, transmembrane (MUC1), mucin 16 (CA125), mesothelin, WAP four-disulfide core domain 2 (HE4), kallikrein 6, kallikrein 10, matrix metalloproteinase 2, prostasin, osteopontin, tetranectin, and inhibin] were similarly analyzed. The 3-fold up-regulated genes were examined and four genes [Notch homologue 3 (NOTCH3), E2F transcription factor 3 (E2F3), GTPase activating protein (RACGAP1), and hematological and neurological expressed 1 (HN1)] distinguished all tumor samples from normal OSE. The 3-fold up-regulated genes were analyzed using RDPA, and the combination of elevated claudin 3 (CLDN3) and elevated vascular endothelial growth factor (VEGF) distinguished the cancers from normal OSE. The 11 known markers were analyzed using RDPA, and a combination of HE4, CA125, and MUC1 expression could distinguish tumor from normal specimens. Expression at the mRNA level in the candidate markers was examined via semiquantitative reverse transcription-PCR and was found to correlate well with the array data. Immunohistochemistry was performed to identify expression of the genes at the protein level in 158 ovarian cancers of different histotypes. A combination of CLDN3, CA125, and MUC1 stained 157 (99.4%) of 158 cancers, and all of the tumors were detected with a combination of CLDN3, CA125, MUC1, and VEGF. Our data are consistent with the possibility that a limited number of markers in combination might identify >99% of epithelial ovarian cancers despite the heterogeneity of the disease.

Stewart G Gardner,  Jeff Boyd,  Lisa Gangi … (2005)
The presence of similar histologic subtypes of epithelial ovarian and endometrial cancers has long been noted, although the relevance of this finding to pathogenesis and clinical management is unclear. Despite similar clinical characteristics, histologic subtypes of cancers of the ovary and endometrium are treated according to organ of origin. This study compares the gene expression profiles of analogous histologic subtypes of cancers of the ovary and endometrium using the same genomic platform to determine the similarities and differences between these tumors. Gene expression profiles of 75 cancers (endometrioid, serous, and clear cell) of the ovary and endometrium, five renal clear cell cancers, and seven normal epithelial brushings were determined using a 11,000-element cDNA array. All images were analyzed using BRB ArrayTools. Validation was done using real-time PCR on select genes and immunohistochemical staining. Comparison across endometrial and ovarian cancers and serous and endometrioid tumors showed expression patterns reflecting their organ of origin. Clear cell tumors, however, showed remarkably similar expression patterns regardless of their origin, even when compared with renal clear cell samples. A set of 43 genes was common to comparisons of each of the three histologic subtypes of ovarian cancer with normal ovarian surface epithelium. The comparison of the gene expression profiles of endometrioid and serous subtypes of ovarian and endometrial cancer are largely unique to the combination of a particular subtype in a specific organ. In contrast, clear cell cancers show a remarkable similarity in gene expression profiles across organs (including kidney) and could not be statistically distinguished.